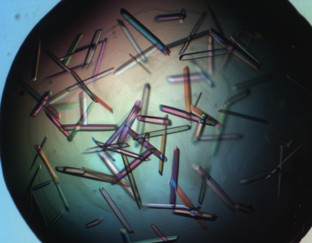 The atomic structure of molecules in a good crystal can be worked out by X-ray crystallography, and used to design drugs or reveal the mechanisms of disease.

It’s not easy to grow crystals though. Proteins are especially difficult to crystallise. One reason for this is that proteins have a natural “handedness” because they are built only from left-handed amino acids. Right-handed amino acids, their mirror image, are not used in nature.

The result is that natural proteins can only fit into 65 of the possible 230 types of crystal. The remaining 165 crystal types would require equal numbers of left-handed and right-handed molecules.

Professor Steven Kent of the University of Chicago, an adjunct professor in the Maurice Wilkins Centre, has devised an innovative solution to this problem.

He advocates making the right-handed form of a protein by chemical synthesis, mixing it with the natural lefthanded form, and crystallising the mixture. This should make all 230 types of crystal possible.

Now Richard Bunker, a Wilkins Centre PhD student, has joined forces with Professor Kent to solve the structure of an important protein from Mycobacterium tuberculosis, the bacterium that causes tuberculosis (TB).

Despite exhaustive efforts by a former Wilkins Centre PhD student, Jessica Chaston, all previous attempts to crystallise Rv1738 had failed.

The solution was to make the righthanded form of the protein in Professor Kent’s lab and crystallise the mixture of right- and left-handed proteins. Mr Bunker then did the rest, solving the atomic structure of Rv1738 at high resolution.

The structure reveals two molecules packed together, with an unusual distribution of charge that appears to be important for its function.

This method promises to be another powerful new weapon for structural biology, and one that the Wilkins Centre is well placed to exploit.

For an update on this story in 2012 see also: Mirror image proteins: new biology from new chemistry