Maurice Wilkins Centre investigators are working with a pioneering international chemist to develop new methods for virus and drug research.

“This work is right at the cutting edge, or maybe a step or two beyond it,” says Professor Steve Kent, a New Zealander based at the University of Chicago. “It relies on the unique combination of skill sets at the Maurice Wilkins Centre, and is happening nowhere else in the world.”

He is referring to a study of virus proteins that was granted support from the Marsden Fund in 2011. As one of the world’s most eminent biochemists, Steve is wellplaced to comment.

The study aims to ascertain the structure of proteins that the orf virus uses to invade cells, to learn more about the biology of such proteins and how their activity might be blocked by drugs and vaccines. The orf virus is related to the small pox virus, and affects agricultural species as well as humans. 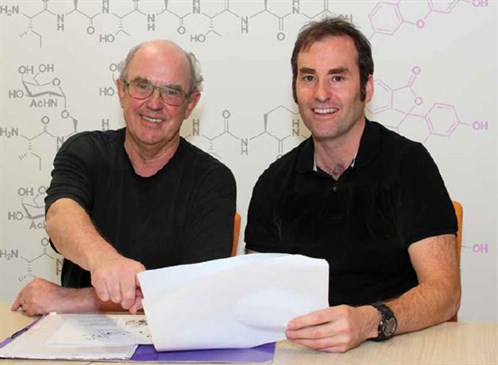 The project is highly innovative at a technical level, and will be the first to combine new techniques developed by Steve and Maurice Wilkins Centre investigators Professors Ted Baker and Margaret Brimble, relying on complementary expertise from all three groups.

One of the pioneering techniques involves chemically synthesising a protein in a mirror image form that never occurs in nature. Mixing this mirror-image protein with its natural form helps the protein to crystallise – a critical step to allow x-ray analysis of its structure.

“It increases the chance you’ll get a protein to crystallise by a factor of 10,” explains Dr Chris Squire who, together with Ted, leads the structural biology component of the orf virus research.

In 2009 Steve and Ted used the new crystallisation method to determine the structure of a protein from Mycobacterium tuberculosis (the bacteria that cause tuberculosis) that had previously proven intractable using more conventional methods.

Dr Paul Harris and PhD student Danny Lee, both from Margaret’s laboratory, established these techniques in New Zealand after spending time in Steve’s lab in Chicago. Other methods developed in Margaret’s lab have since been combined with Steve’s techniques to make a synthetic analogue of erythropoietin, the protein that controls red blood cell production.

All these new methods will be used in the Marsden-funded research, which will not only yield information about viral proteins that are difficult to study with traditional methods, but also test the potential of combining the techniques.

The Maurice Wilkins Centre helped to foster links with Steve, who has visited chemistry and structural biology research departments throughout New Zealand over the last three years, under the Centre’s Visiting Speakers Programme. The Centre also supported the research undertaken by Danny in Steve’s lab in Chicago, and was instrumental in establishing the synthetic protein facility in Auckland that will be used in the new virus protein research.