A collaboration between chemists and biologists from the Maurice Wilkins Centre has enabled researchers to solve the structure of a potent antimicrobial protein with potential to tackle bacterial diseases in kiwifruit vines.

The University of Auckland based researchers, Distinguished Professor Margaret Brimble  and Dr Paul Harris from the School of Chemical Sciences, and Distinguished Professor Ted Baker, Dr Christopher Squire and PhD student Horace Yeung from the School of Biological Sciences, had their novel research published as the cover article in the 17 May 2016 international edition of leading chemistry journal, Angewandte Chemie. The article was also commended as a Very Important Paper due to its high evaluation by referees.

The snakin-1 protein is found in potatoes and was previously identified as a unique class of antibiotic. Professor Brimble, a lead investigator on the study, says unravelling the protein’s structure now enables further investigation into the production of a natural, plant-produced bactericide with potential to fight kiwifruit Psa infections – a bacterial disease that can impact productivity in kiwifruit vines.

“Solving the structure provides clues to the parts of the protein we can modify to rationally design a new class of antibiotics,” Dr Squire says.

Researchers have long held high hopes for snakin-1 and have been attempting to determine its structure for over a decade. University of Auckland chemists began work on the protein six years ago due to its promise in tackling kiwifruit disease. Dr Harris explains the protein was identified 14 years ago but was not successfully crystallised until now.

The Maurice Wilkins Centre team attributes the breakthrough to a unique collaboration between chemists and biologists within the New Zealand Centre of Research Excellence.

“The Maurice Wilkins Centre has supported the Brimble Peptide Chemistry Laboratory at the University of Auckland and, with assistance from a prestigious Marsden Fund grant, the peptide chemists had the opportunity to work with world-class X-ray crystallographers,” Dr Harris says.

Producing a protein crystal is key to determining the molecular make-up of a protein, which in turn enables its modification to develop new antibiotic compounds. The research team used an ingenious and unconventional combination of techniques from chemistry and biology to synthesize and crystallise the protein and solve its structure.

Professor Brimble says initial attempts to crystallize the synthetic snakin-1 protein were unsuccessful, so PhD student Horace Yeung turned to a newly developed approach called racemic protein crystallography. The first step was to produce a racemic protein mixture – a combination of the natural left (L) and mirror-image (D) forms of the protein to greatly increase chances of crystallisation.

Mr Yeung then worked with Professor Baker and Dr Squire to use X-ray crystallography at the Australian Synchrotron in an attempt to determine the protein’s structure. Unfortunately the results showed significant signs of radiation damage and the structure remained elusive.

“It’s a fringe technique and the first time it has ever been applied to a racemic protein mixture.”

The technique worked, and the researchers were finally able to unlock the elusive structure of the snakin-1 protein. The team now hopes to produce a number of variants of the antimicrobial protein with a wide-range of potential applications.

Full details of the study can be found in the latest edition of Angewandte Chemie. 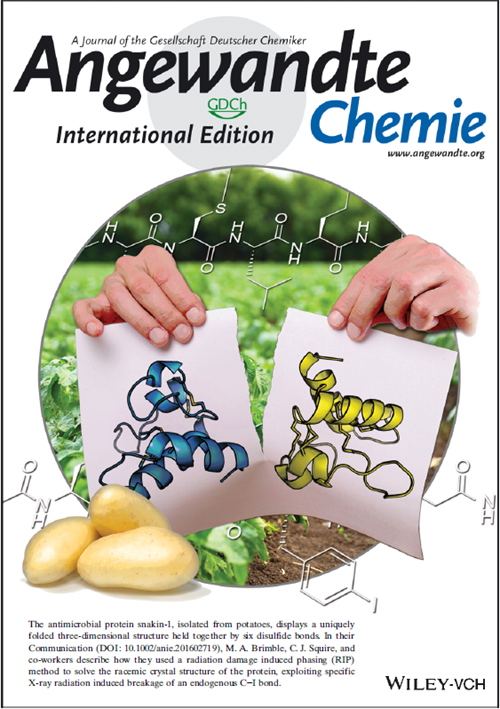