Associate Investigator Professor Kurt Krause and colleagues have unlocked a potential catalyst for the development of new tuberculosis drug targets after determining the structure of an essential enzyme in Mycobacterium tuberculosis.

Professor Krause and co-workers, including fellow Maurice Wilkins Centre investigators Associate Professor Renwick Dobson and Dr Yoshio Nakatani, were able to determine the structure of the enzyme glutamate racemase (MurI) from Mycobacterium tuberculosis, the pathogenic bacterium that causes tuberculosis, and the non-pathogenic Mycobacterium smegmatis. Their research was published as the cover article in a May 2016 edition of Biochemical Journal.

“Glutamate racemase is an enzyme used to make one of the key building blocks of bacterial cell walls,” Professor Krause explained. “For that reason it has also been a favoured target in pharmaceutical drug design efforts aimed at blocking the enzyme’s function in several pathogenic bacteria such as Streptococcus pneumoniae, or the resistant enterococcus superbug known as VRE.”

Once the essential role of the enzyme was established, Professor Krause and colleagues from the Universities of Otago, Canterbury and Melbourne were able to complete the enzyme’s structure in M. tuberculosis and M. smegmatis for the first time. Their work revealed similarities with glutamate racemase enzymes found in other bacteria, but with important distinctions at the site where the enzyme binds to a substrate and undergoes chemical reactions.

Professor Krause is hopeful that the development of successful inhibitors against this enzyme from mycobacteria will lead to a new antibiotic for use against tuberculosis, which remains an important pathogen worldwide.

“Unfortunately in too many cases antibiotics are no longer effective so we have a desperate need for new antibiotics to be developed.” 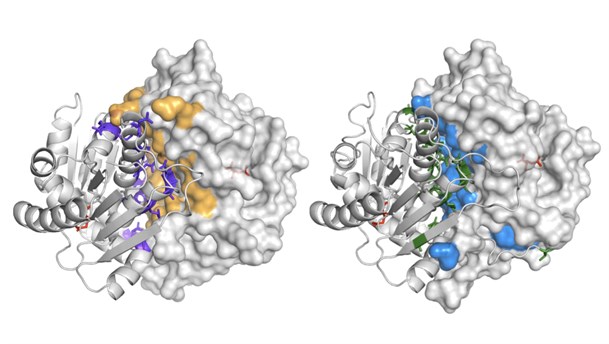 Image: Illustration of the dimer interface in mycobacterial glutamate racemase - the closely related biological dimer of MurIMtb (left) and MurIMsm (right) are shown as a molecular surface of one monomer juxtaposed with the other monomer shown as a protein cartoon. Interface residues that form hydrogen-bonding interactions or salt links are highlighted in purple and yellow in MurIMtb and in green and blue in MurIMsm.
(c) Professor Kurt Krause