Distinguished Professor Dame Margaret Brimble FRS, Principal Investigator at the Maurice Wilkins Centre, University of Auckland, has been awarded a Zonta New Zealand Women of Achievement Award for 2019 by the Zonta Club of Auckland. 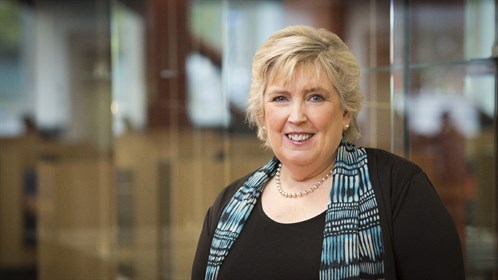 Founded in 1919, Zonta is an international non-profit organisation which has clubs all over the world. It has been active in New Zealand for 50 years and 28 clubs around the country. The main purpose of its awards programme is to recognise New Zealand women who have been empowering other women and girls at a local, national or international level.

This year the organisation is holding centennial celebrations by recognising 50 New Zealand women who, along with 50 recognised in 2016, make up a list of 100 Women of Achievement for the centennial.

Professor Brimble said she was delighted to be honoured by Zonta.

“Encouraging and supporting young women to become scientists and to pursue research as a career is one of the most rewarding aspects of my work,” she said. “There is still a glass ceiling for female scientists to achieve at the highest level and I hope that I’ve been able to encourage other women to aim high and make a difference.”

Professor Dame Brimble is a pioneer in drug discovery in New Zealand who has developed a treatment for Rett Syndrome, Fragile X Syndrome and autism disorders. Trofinetide, currently entering Phase lll human clinical trials, is the first drug to be successfully developed by a New Zealand spin-out company and one of very few discovered in an academic laboratory.

She is co-founder of start-up biotech company SapVax which is developing ‘first in class’ cancer vaccines which are based on novel peptide platform technology and funded by US accelerator BioMotiv. This work was awarded the 2018 George and Christine Sosnovsky Award for Cancer Therapy from the UK Royal Society of Chemistry.

Earlier this year she won the BNZ Supreme Award and Baldwins Researcher Entrepreneur Award at the KiwiNet Research Commercialisation Awards.

An inventor on more than 50 patents, Professor Dame Brimble holds the chair of Organic Chemistry and is Director of Medicinal Chemistry in the Schools of Chemical Sciences and Biological Sciences at the University of Auckland.

She is also Principal Investigator in the Maurice Wilkins Centre for Molecular Biodiscovery and a past president of the International Union of Pure and Applied Chemistry Organic Division, the International Society for Heterocyclic Chemistry and the RSNZ Rutherford Foundation.

A Dame Companion of the New Zealand Order of Merit for Services to Science, Professor Dame Brimble is the only New Zealand-based woman elected a Fellow of the Royal Society London. She was inducted into the American Chemical Society Medicinal Chemistry Hall of Fame in San Diego in September this year.

She is also a Fellow of the New Zealand Royal Society Te Apārangi, the Royal Australian Chemical Institute and the New Zealand Institute of Chemistry. She is a recipient of the 2016 Marsden Medal, the 2012 RSNZ Rutherford Medal and the MacDiarmid and Hector Medals and was the 2007 L’Oreal-UNESCO Women in Science laureate in materials science for Asia Pacific. She won the Westpac Trust Women in Influence Award for Science and Technology in 2014.