“The Maurice Wilkins Centre is committed to training New Zealand’s future leaders in biomedicine,” says Director Professor Rod Dunbar. “Future Science Day is an opportunity for some of our most experienced and successful investigators to share tips and pass the torch to the next generation.”

Professor Bill Wilson of the Auckland Cancer Society Research Centre spoke about creating and sustaining successful research relationships, Professor Peter Hunter discussed productive interdisciplinary collaborations involving the Auckland Bioengineering Institute, and Dr Anthony Phillips described how to build connections between scientists and clinicians, based on his experience in The University of Auckland’s School of Biological Sciences and Department of Surgery. 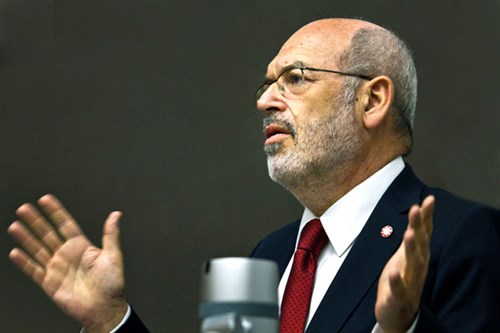 The Prime Minister’s Chief Science Advisor, Professor Sir Peter Gluckman (pictured), spoke more broadly about changes in New Zealand science and its future. He highlighted the importance of science to the economy, and the value of bridging the boundaries between traditional scientific disciplines and between public and private sector science.

“Through events like these we want to promote networking and interdisciplinary collaboration between young investigators, but we also need to encourage them to learn each other’s languages,” says Rod.

Students were therefore challenged to explain their research, in three minutes or less, with the mixed-discipline audience scoring their ability to communicate with non-specialists.