The Maurice Wilkins Centre launched the ‘Sugar in Schools’ study in 2017 – a ground-breaking multi-year programme bringing science to thousands of schoolchildren across New Zealand, particularly those in regional communities.

Sugar in our diet breaks down in our gut to one part fructose, one part glucose – but although our bodies all take up glucose very well, we differ in how easily our bodies take up fructose. There is some evidence to suggest that higher levels of fructose in the body may increase the risk of diabetes or obesity. This new study aims to examine how individual children in New Zealand vary in their ability to take up fructose, especially those of Māori and Pacific Island descent who suffer higher rates of diabetes and obesity. The study is being rolled out in schools with regions including the Far North, Bay of Plenty and East Coast regions being prioritised

The students and their teachers are in charge of conducting the study themselves, with MWC scientists providing advice. This allows the students to experience being the ‘scientists’ while their science teachers provide context. The students measure fructose uptake using a test performed on their breath after drinking fructose.

“We hit upon this idea of the fructose breath test, because it’s relatively easy to perform and it’s safe,” says Professor Peter Shepherd, Deputy Director of the Maurice Wilkins Centre.

An added benefit of the study is that it provides a way for upskilling teachers with the latest knowledge in metabolic diseases. “Biology teachers have a massive job to do,” says Peter. “They’re expected to cover everything from evolution to microbes to human health, across this huge spectrum of knowledge. So they value highly the professional development opportunities the MWC provides.”

The study’s launch event at Opotiki College featured free public talks and workshops aimed at changing attitudes within the community and boosting the interest and achievement of school students in science. Over the course of two days, 71 students from the college were enrolled into the study. The launch was also notable for being the first event of its kind organised through a collaboration known as Te Wheke – a unique collaboration of industry and local partners including Te Rangatahi o te Whenua Trust and Nga Uri o te Ngahere Trust.

During 2017, pilot studies were undertaken in 16 schools from Dunedin to Kaitaia, with 410 children tested in total.  This included one study conducted by The Moko Foundation in Kaitaia in which the tests were performed in a wananga setting. The pilot studies involved Year 9 students being tested, with Year 13 students assisting, and over the next few years, many of the same students will be followed up. From 2018 communities in other parts of the country will be offered the opportunity to participate in the study, with a particular emphasis on bringing it to schools geographically remote from major population centres. 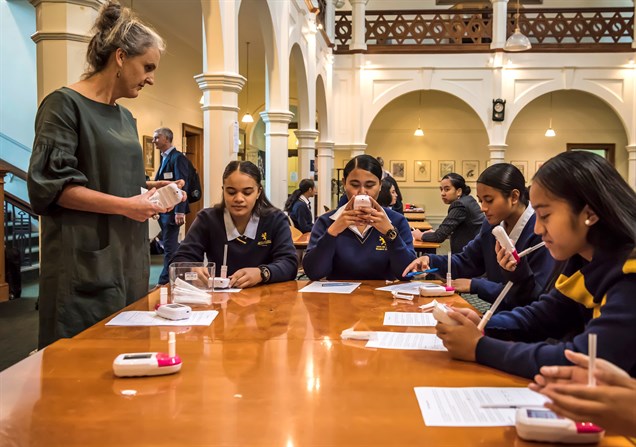