Stem cells have the capacity to replenish any type of cell in the body. It’s this quality that gives stem cells the potential to transform modern medicine and excites so much interest throughout the world. 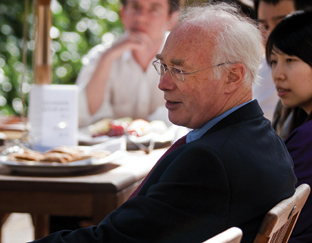 Scientists hope that some day stem cells can be used to replace cells in the human body that are damaged due to disease or injury. Although the use of stem cells from adult humans is widely supported, the potential use of embryonic stem cells has raised moral and ethical concerns both in terms of human therapy and manipulation of animals.

In the thick of the stem-cell debate is British Professor Sir Martin Evans. Sir Martin was the first to identify and isolate embryonic stem cells from mice and show that these cells could be grown in the lab. His pioneering work paved the way for gene targeting by socalled “knockout technology”– a technique that allows scientists to determine the role that individual genes play in health and disease. Sir Martin’s work also earned him and two other scientists, Oliver Smithies and Mario Capecchi, the 2007 Nobel Prize in Medicine.

On 10 September 2009 Sir Martin delivered an inspiring talk about his stem cell research to students and members of the public at the Maurice Wilkins Lecture in Auckland. He described how he discovered that stem cells could be genetically altered in the laboratory then injected into a mouse embryo to create offspring with changes in their DNA. Sir Martin also took time out to talk to Maurice Wilkins Centre graduate students about what it takes to do world-leading research. He advised the students to spend as much time as possible doing their own experiments, even if this means challenging the advice of their supervisors, and to “expect the unexpected”.