Discovery and development of new drugs involves many years of research and testing, and there is global interest in alternative methods capable of accelerating the path from identifying a target molecule to a drug in the clinic. MWC scientists throughout NZ are collaborating to improve a novel drug discovery technique – called “transition state analysis” – and open up new pipelines of effective medicines.

Enzymes are protein molecules that carry out chemical reactions in the body and in infectious agents. They are common targets for drugs because stopping an enzyme from working can switch off disease processes involving that particular enzyme. Most drugs are designed to fit tightly into a part of the enzyme called the active site and stop it from working. Transition state analysis involves a lot of very detailed analysis of the target enzyme. MWC Principal Investigator Emily Parker from Victoria University’s Ferrier Research Institute explains: “Some drug design techniques treat the active site as just a static shape that you need to slot the drug molecule into. However, the shape of an enzyme is not fixed, it changes all the time, as the atoms and bonds vibrate and move – this movement is part of their normal process. Understanding how they work and move allows us to design drugs that can fit into the enzyme very specifically and very tightly and stop the enzyme in its tracks.”

The use of this detailed information for drug design was established by Professor Vern Schramm at Albert Einstein College of Medicine in New York. Ferrier Institute Professors Peter Tyler, Gary Evans and Richard Furneaux, have been working with Professor Schramm for over 20 years using transition state analysis information to make drugs that block enzymes.  This collaboration designed and synthesised the cancer drug Mundesine, which was approved in Japan during 2017 for the treatment of patients with peripheral T-cell lymphoma, the first approval for an agent of this type in the world. 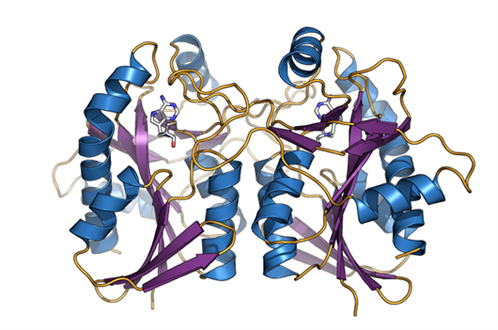