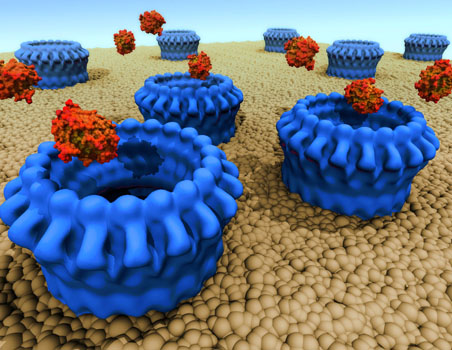 People who require a bone marrow transplant after chemotherapy risk transplant rejection by their own immune system. The body identifies the donor cells as foreign, triggering an immune response that can wipe out up to 90 per cent of the transplant in the first 24 hours despite standard immunosuppressant therapy.

Scientists from New Zealand and Australia are working on a new way to temporarily suppress the immune system, allowing the transplant to gain a foothold and begin replenishing the bone marrow in the critical early period. They are targeting a protein called perforin, produced by the immune system to punch holes in cells it sees as a threat and let toxic “killer” molecules inside. They have shown that perforin inhibitors can protect bone marrow transplants in the laboratory, and now they’re refining the drugs with the aim of testing in humans. If successful, the drugs may eventually be used for a wide range of transplants.

Matthew has contributed to the work, providing critical information about the fate of the drugs in the body. His PhD is supervised by Auckland Cancer Society Research Centre (ACSRC) medicinal chemists Dr Julie Spicer and Professor Bill Denny and University of Auckland pharmacologist Dr Nuala Helsby.

“We’re optimising the compounds, and once we’re happy with how well they inhibit perforin we need to think about the properties we require in a drug, and that’s where Matthew comes in,” says Julie, who leads the project in New Zealand. Amongst those properties, drugs need to reach the right levels in the right tissues, remain active long enough to be effective, and be eliminated when no longer needed.

Matthew studies how the inhibitors pass through the body and are broken down and the chemists use that information to refine the drugs. The programme has now moved beyond the initial inhibitors Matthew focused on for his PhD, but Julie says the foundation he laid has been essential to their subsequent work.

The work began when Professor Joe Trapani, a perforin expert from the Peter MacCallum Cancer Centre in Australia, approached the ACSRC for help designing the drugs. Together with collaborators from Monash University, Queensland Institute of Medical Research, and Medicines Development, they won a prestigious Wellcome Trust (UK) grant for the work. Matthew is one of a many of postgraduate students supported by the Maurice Wilkins Centre to work on cross-disciplinary projects.

He says that being part of an active international drug development programme has been a valuable experience, in particular the exposure to a broad range of scientific fields.