Nurturing the next generation of scientists is an important part of the Maurice Wilkins Centre’s work – and senior students contribute an enormous amount to research success. 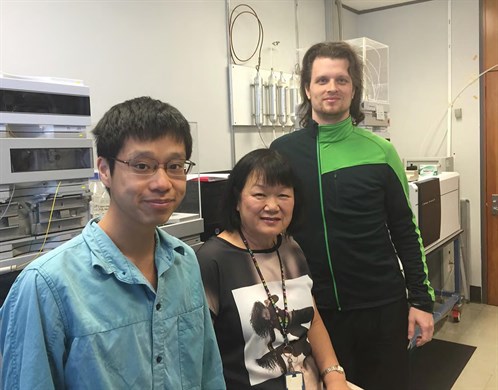 “Students are young, energetic, and enthusiastic and can bring new ideas and a fresh approach to solving difficult problems,” says Associate Professor Lai-Ming Ching, a MWC associate investigator and member of the Auckland Cancer Society Research Centre at the University of Auckland.

Take PhD students and MWC affiliate investigators Simon Fung and Petr Tomek, who are working on an immunotherapy project headed by Lai-Ming. They are looking at a protein called IDO1 (indoleamine 2,3-dioxygenase 1), which cancer cells use to impair the function of the immune system’s killer cells. The aim is to develop a drug to block the protein’s action and give the immune system’s cancer killers a fighting chance.

Simon identified how various compounds interacted with the IDO1 protein to find out which ones were most likely to limit its activity. Already, he has two papers published in peer-reviewed international journals.

Petr developed a new biochemical assay for measuring IDO1 activity that is more sensitive and easier to use than those previously published, and is establishing an assay that will measure the activity of a related protein, TDO (tryptophan oxygenase). He also has two papers published.

Lai-Ming, a tumour biologist, is delighted with the pair’s significant contribution. “Drug development requires a multi-disciplinary team approach, engaging researchers from different disciplines in a common goal,” she says. “Involving Simon and Petr exposes them to the team approach, and allows them an opportunity to work with investigators from a broad range of disciplines – from synthetic chemistry to in-vivo pharmacology and toxicology.”

Simon, who has a BSc with first-class honours from the University of Auckland, was keen to explore two of his favourite subjects, immunology and cancer, in his doctoral studies; his work on the IDO1 project has been jointly funded by the MWC and the Auckland Medical Research Foundation.

Petr, who did graduate and post-graduate studies at University of South Bohemia in his native Czech Republic, was attracted to the MWC after reading the list of PhD projects listed on Lai-Ming’s website. “I am strongly convinced that harnessing the power of our immune system is the most sensible and powerful approach in the battle against cancer.”

Both Simon and Petr are keen to pursue post-doctoral careers in biomedical research – where they will, in turn, help to raise the next generation of cancer fighters.