A new way to shut down the bacterium responsible for tuberculosis has been devised by researchers in one of the Maurice Wilkins Centre’s longest-standing collaborations. 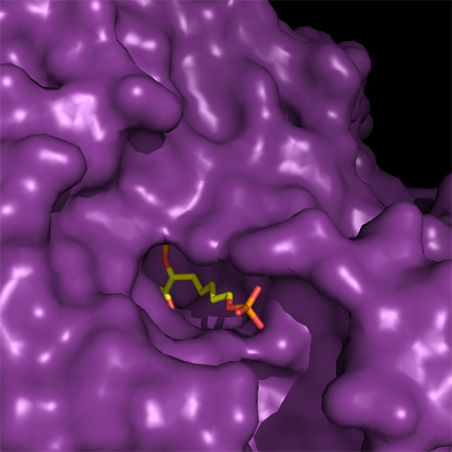 Emily studies enzymes and has a particular interest in DAH7PS (3-deoxy-D-arabinoheptulosonate 7-phosphate synthase), an enzyme used by bacteria to make three crucial amino acids. Amino acids are the building blocks of proteins and therefore essential to life, but humans have a different way of acquiring these particular amino acids. DAH7PS is a particularly good target for antibacterial drugs, since humans and other animals would be unaffected if DAH7PS were disabled whereas bacteria could not survive.

“I was interested in enzymes like this, and Ted was looking at targets for tuberculosis, so our interests intersected,” Emily explains. Ted leads a structural biology group that examines the shape of proteins. Since its shape determines how a protein interacts with other molecules, structural analysis provides clues not only about its normal biological function but how to design drugs to block its activity. Finding new drug targets for tuberculosis is a major focus for the group.

“Ted and I began working together in 2005, with Dr Shaun Lott and Mrs Heather Baker from The University of Auckland,” Emily says. “It’s been one of the Maurice Wilkins Centre’s longest-standing relationships.”

The structure of DAH7PS was solved within a year. “This showed us how the enzyme was likely to work and gave us the basis for designing molecules that might interrupt it.” Now Emily’s PhD student Sebastian Reichau has made a compound that does just that.

By far the most potent inhibitor of DAH7PS to date, it provides a lead compound for further refinement. The Maurice Wilkins Centre has provided funding for Sebastian to visit computer modeller Dr Jack Flanagan at The University of Auckland to advance the work. The next step will be to ensure the compound can get inside M. tuberculosis cells and do its job there.

Meanwhile, DAH7PS is becoming an even more promising target. “Recent research shows just how critical the enzyme is, and not just in the ways we originally understood,” Emily says. “It turns out that it intersects with many other enzymes and activities in M. tuberculosis. An inhibitor would shut down all of these processes, not just one, and it would be much harder for the bacterium to develop resistance.” This is especially important for tuberculosis, which kills more than a million people each year and is becomingly increasingly resistant to current treatments.

Image: Representation of the new inhibitor (shown in orange and yellow) sitting in the biologically active site of the target enzyme DAH7PS (shown in purple) and blocking the enzyme's activity. Image courtesy of Sebastian Reichau.