Stem cells are cells that can grow into different types of cells in the body.  They sit in special zones throughout the body waiting to be called on to generate new cells.  Different tissues in the body rely on their stem cells to keep them healthy – but stem cells from one tissue (e.g. skin) can’t generally make another (e.g. heart)

Yet in 2006 Shimya Yamanaka discovered that some human cells could be re-programmed from their limited fates so they could turn into over 200 different types of cells – they became “pluripotent”.  This Nobel Prize-winning discovery was soon followed by many different discoveries about how to make similar pluripotent stem cells from many different kinds of adult cells, and a stem cell revolution began.

“Induced Pluripotent Stem Cells” or iPS cells can now be made in many different ways, and have raised hopes that we may soon be able to use them to rebuild or repair damaged tissues.  Even before we are able to use them in the clinic, iPS cells are already revolutionising the study of disease processes.

The MWC supported the production of New Zealand’s first iPS cell lines, by Associate Professor Alan Davidson and his team at the University of Auckland’s Department of Molecular Medicine and Pathology.  These iPS cell lines – dubbed MANZ1 and MANZ2 (with the “M” designating the MWC) – are already enabling research breakthroughs in understanding disease processes and testing new therapies on human cells and tissues that would normally be impossible to isolate in a laboratory dish.

Most recently Davidson and his team have used them to grow small models of human kidneys called kidney organoids.  These model kidneys are no bigger than 1mm wide, so not yet useful in therapy for kidney disease.  Yet because they contain many of the different cell types of a normal kidney, and they are organised in a similar way to a real human kidney, they can be used to model kidney diseases.  In a recent paper1 the team describes a new method to efficiently grow kidney organoids in large numbers, and then use gene editing to explore the function of a gene implicated in kidney disease.  This sophisticated combination of generating human iPS cell lines, editing their genes with the “CRISPR/Cas” technique, then growing human tissue organoids to make discoveries about those genes, shows the power of the new techniques.  They also illustrate how far stem cell science has come since Yamanaka’s discoveries just over a decade ago.

“Now that we can make human kidney tissue in unlimited quantities,” says Alan, “we can focus on using kidney organoids to discover and test new treatments for disorders such as acute kidney injury, kidney fibrosis and inherited conditions such as Cystinosis.”  As for the hope of growing a full kidney in a dish for renal transplantation: “Unfortunately not any time soon,” says Alan, “but it’s already possible to envisage helping restore some kidney functions with kidney cells generated in organoids from patients’ own cells.” 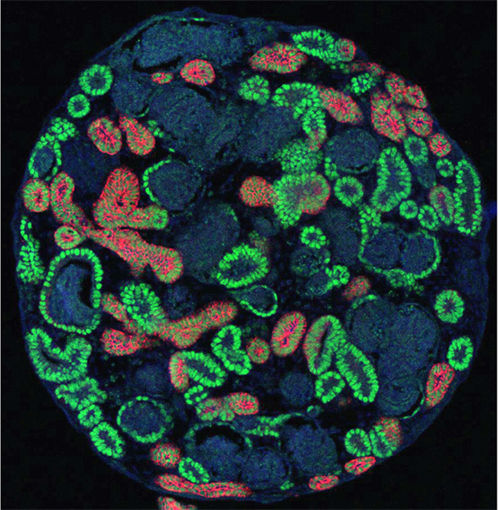 Cross section through an organoid mode, grown by members in the Davidson lab, showing fluorescently labeled profiles of renal tubules