A new Maurice Wilkins Centre study is bringing together researchers from across the country to investigate the genetic factors that predispose some New Zealanders to a greater risk of obesity or diabetes. The study is already challenging popular opinions about New Zealand’s rising obesity rates.

You are what you eat, right? Not if you ask Professor Peter Shepherd, Deputy Director of the Maurice Wilkins Centre and one of four co-directors of a new $1 million study analysing up to 500 genes suspected of affecting individuals’ appetite and/or the way theycontrol their energy metabolism. 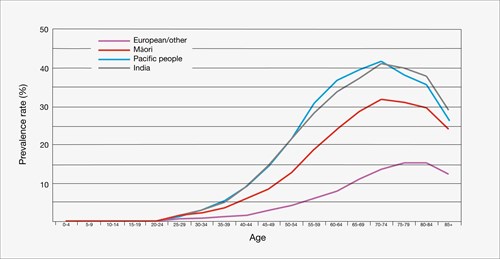 “Popular opinion frequently cites poor diet or lack of exercise as the major cause of obesity,” says Peter, but he is quick to point out that while this is in principle true, it doesn’t explain why individuals are affected in different ways by similar degrees of bad diet and lack of exercise.

Peter is working with fellow Maurice Wilkins Centre investigators Dr Rinki Murphy, Professors Dave Grattan and Tony Merriman, and Dr Donia McCartney-Coxon on a landmark programme to study those genes in a New Zealand context. Once results are in, MWC researchers will use their combined skills to determine how the information can be used to develop targeted therapeutic strategies or rationally designed prevention programmes.

“No one has done these studies in New Zealand populations,” says Rinki, the study’s clinical co-director. “If we can identify genes that play a role in this we will be better placed to successfully tackle these major diseases.”

Professor Grattan from the University of Otago points to overseas studies showing there are a number of genes that influence weight or a person’s risk of developing Type 2 diabetes. “The evidence is actually overwhelming that there are biological differences between individuals that regulate all the things that make us different,” he says. “It shouldn’t be surprising that these also cover processes regulating appetite, metabolism and accumulation of fat.”

Professor Tony Merriman is co-director responsible for the genetic analysis that will use samples from 600 New Zealanders. Tony and his University of Otago team built up considerable experience in the techniques required when they conducted a gout study looking for genetic variance between New Zealand populations. “The technology is really shooting away to allow us to zero in on specific genes.” Tony also notes the results can give the team a continual source of things to follow-up on: “It’s a really valuable data set and can be very useful in the public health context or in developing new and better interventions.”

By bringing together geneticists, clinicians, neuroscientists and biochemists from across the country, the Maurice Wilkins Centre study is also breaking down institutional and disciplinary barriers to deliver exciting new approaches to one of New Zealand’s biggest health issues.