The Maurice Wilkins Centre continues to lead the way in establishing biomedical research ties between New Zealand and China. 2015 marked important developments in relations that will deliver significant health and economic benefits for both countries.

Since 2012 the Maurice Wilkins Centre has worked closely with Chinese counterparts to build strong biomedical research collaborations and strategic links. In 2015, those ties culminated in the establishment of a Joint Centre for Biomedicine, as well as agreements designed to stimulate and support innovation. 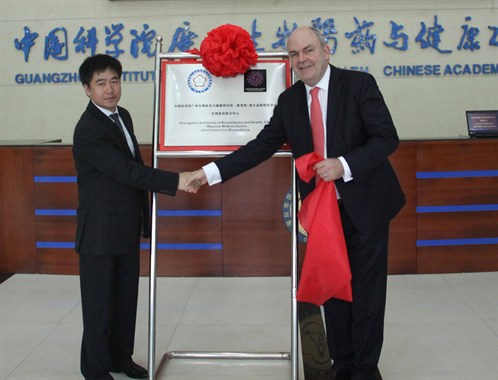 “We are very excited about the new opportunities these agreements will generate and delighted that the Maurice Wilkins Centre has been able to foster these relationships,” says MWC Director Professor Rod Dunbar.

In mid-November, the establishment of a joint centre for medical research between the Maurice Wilkins Centre and the Guangzhou Institutes of Biomedicine and Health was marked by a Chinese delegation visiting the University of Auckland, the Centre’s host institution. The Chinese delegation was led by Professor Yaping Zhang, Vice President of Chinese Academy of Sciences, who unveiled a plaque celebrating the Chinese government’s accreditation of the Joint Centre for Biomedicine. The joint centre is the first of its kind between New Zealand and China and will focus on leading-edge medical science to seek new treatments for diseases such as cancer.

“We are delighted to be working together with our colleagues in China in such a close collaboration. The New Zealand-China relationship has deepened throughout the process of this agreement and we see many, many valuable opportunities ahead,” Adam says.

Cross-cultural research and economic relations were further strengthened in December 2015 when a delegation from the University of Auckland travelled to China to sign a Memorandum of Understanding (MOU) with the Guangdong Provincial Science & Technology Department. The scope of biomedical research covered by the MOU includes stem cell therapy and regenerative medicine, metabolic disease, immune therapy for cancer, as well as drug discovery.

“A key focus under the partnership with Guangdong is innovation that will lead to new therapies for human disease,” says MWC Deputy Director Professor Peter Shepherd.  “Part of the agreement with the Guangzhou Institutes of Biomedicine and Health is to develop these therapies jointly, enabling both countries to benefit from accelerated progress from the laboratory to the clinic.”

Image: Mr. Chen Guanghao, Party Secretary and Deputy Director General of the Guangzhou Institutes of Biomedicine and Health (GIBH), with the Hon Steven Joyce, New Zealand Minister for Science and Innovation, at the unveiling ceremony of the Joint Centre for Biomedicine between GIBH and the Maurice Wilkins Centre. Image courtesy GIBH.