One of the aims of the MWC is to help our early career researchers develop skills to become future leaders in New Zealand’s biomedical research community. These events were organised in response to feedback from MWC investigators requesting workshops focussed on developing writing skills for grant applications and publications which are valuable skills required for career progression.

The workshops, held in Dunedin and Auckland in mid-August 2019, featured talks by local researchers experienced in writing and reviewing publications, grants and media stories. They also included an overview of publication strategies for early career researchers and presentations from local research advisors.

The Dunedin workshop, attended by 50 early career researchers included presentations by University of Otago investigators Dr Peter Mace on “What’s your story?” and Professor Lisa Matisoo-Smith on “Engaging your audience.” There was also an interactive session on creative scientific writing by Professor Lloyd Davis, in which participants were encouraged to practice some simple writing techniques. 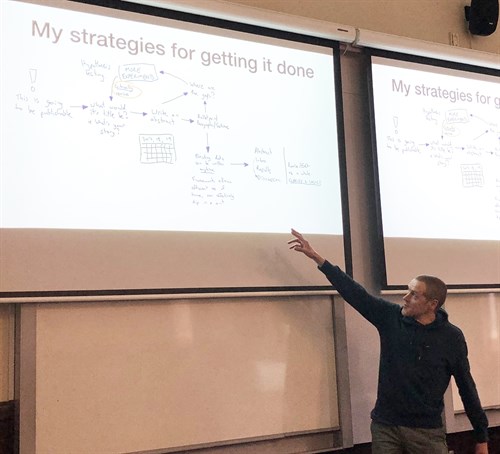 Pictured: Dr Peter Mace from the University of Otago presenting at the Dunedin workshop.

A further 50 early career researchers attended the workshop in Auckland, where they heard from presenters including Dr Cherie Blenkiron, Dr Troy Merry and Dr Brya Matthews, each giving their own take on what to do in order to maximise research output. This workshop also incorporated a joint session with the University of Auckland’s Faculty of Medical and Health Sciences (FMHS) postdoc society. This featured a practical session on “Crafting your narrative” led by Dr Veronika Sander, during which participants were given the opportunity to practice some writing skills and get feedback from their peers.

The Auckland workshop concluded with an interactive session facilitated by Professor Helen Sword, exploring the key elements that make for an engaging piece of academic writing and strategies for becoming a more productive writer.

Overall, the feedback from participants at both workshops was very positive. Many reported that they came away with a variety of helpful strategies on how to structure a paper and communicate their research more effectively. There was also a lot of support from participants for the MWC to organise more workshops like this that help early career researchers develop skills to progress their careers.

The MWC are considering repeating the workshops in new locations in 2020 if there is demand from early career researchers.  In the meantime, recordings of the presentations below will be put online soon for MWC investigators to access.