The Maurice Wilkins Centre was delighted to host scientists from Samoa recently who were in New Zealand to explore possible areas of biomedical research their organisation could undertake back in Samoa.

In early June, MWC investigators in Auckland and Wellington took Dr Fiame Leo and Mr Viliamu Ah Sam, from the Scientific Research Organisation of Samoa (SROS), on tours of the University of Auckland’s Faculty of Medical and Health Sciences (FMHS) and Victoria University of Wellington’s Centre for Biodiscovery (CfB) labs, respectively.

The visits were part of a two-week fact-finding mission, in collaboration with the MWC, to identify potential avenues of biomedical research that could be established back in Samoa, and how the MWC and CfB could assist. It was also a follow-up to a similar visit last year by the SROS leadership team.

“The MWC is engaging closely with Māori and Pacific communities in New Zealand, so building research links with Samoa is an important new addition to this strategy,” said Professor Peter Shepherd, MWC Deputy Director.

Their main interest was to identify opportunities to utilise native Samoan biota as sources of valuable bioactive natural products, and to determine how both natural products chemistry and mammalian cell line culture facilities could be set up in Apia. 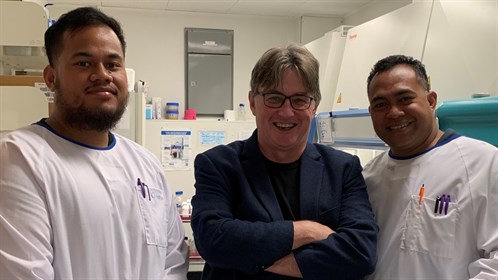 Mr Viliamu Ah Sam (left) and Dr Fiame Leo and (right) from the Scientific Research Organisation of Samoa (SROS), with Professor Peter Shepherd at the University of Auckland.

“It was great to host Fiame and Viliamu,” said Rob. “The visit was fun, but also very productive in terms of practical discussions around research directions and collaborations for SROS with both MWC and the CfB.”

The pair also met with other MWC investigators at the CfB, including Associate Professor Paul Teesdale-Spittle, Dr Andrew Munkacsi, Dr Helen Woolner and Associate Professor Wayne Patrick. They also had a formal meeting with Dame Winnie Laban from AVC Pasifika.

The ultimate aim of these exchange visits between Samoa and New Zealand is to establish a productive, two-way research programme that provides benefit to both countries with impactful science.