The Maurice Wilkins Centre is delighted to announce its new leadership team from 2020.

All four are Fellows of the Royal Society of New Zealand - Te Apārangi, and together they bring a blend of skills that span the Centre's activities and localities. 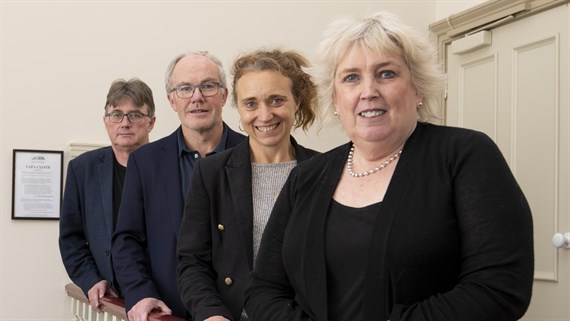 Professor Peter Shepherd has played a leading role in a major project investigating potential genetic factors contributing to metabolic health in Māori and Pacific peoples. Peter has also led the development of research partnerships between the Maurice Wilkins Centre and Ngāti Porou Hauora, the Moko Foundation and Pacific Health Plus to involve them in this research. He passionately believes in making science more accessible to the public, and has done this through a range of outreach programmes such as the nationwide ‘Sugar in Schools’ study and the ‘MWC Biology Teacher Professional Development Days’.

Distinguished Professor Dame Margaret Brimble, who is also a Fellow of the Royal Society London, brings globally acclaimed chemistry skills and experience in translating drugs into the clinic, highlighting the important role chemistry plays in the MWC’s research programmes.

Professor Greg Cook is a microbiologist involved in multidisciplinary research programmes, ranging from working with the Global Alliance for TB on new strategies to combat drug-resistant forms of tuberculosis and developing new generation antimicrobials to combat AMR.

“The track record of this team combined with their geographical location means we are well on track to building a truly national collaborative effort to bring our brightest minds together to combat some the major disease threats facing Aotearoa and the world,” says Professor Shepherd. The team have already begun work on a competitive rebid for future funding allocated by the Government’s Tertiary Education Commission.