The positive results seen in the ARCHER 1050 trial have been welcomed by researchers at the Maurice Wilkins Centre, especially those who were instrumental in pioneering dacomitinib’s discovery and championing its subsequent selection as a clinical candidate.

Associate Investigator Dr Jeff Smaill, based at the Auckland Cancer Society Research Centre (ACSRC), University of Auckland, led the New Zealand side of a research collaboration with Pfizer Ann Arbor that sought to optimise an earlier clinical candidate they had developed called canertinib. The project resulted in the discovery and selection of dacomitinib for clinical development in 2003. The story of their medicinal chemistry-based lead optimisation work was finally published in the Journal of Medicinal Chemistry in 2016.[1] Book chapters describing this work and the process optimisation leading to production of 400 kg of active pharmaceutical ingredient were also published later that same year.[2,3] 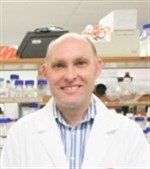 Dr Jeff Smaill, Senior Researcher at the Auckland Cancer Society Research Centre (ACSRC) and an Associate Investigator with the Maurice Wilkins Centre, led the New Zealand side of a research collaboration that resulted in the discovery of dacomitinib.

“Chemists in New Zealand and the US spent about a year making well over a hundred compounds and testing them. And of those, two close analogues were particularly interesting and were advanced to detailed evaluation where dacomitinib ended up being the winner,” Dr Smaill said. “It went into clinical trials and it's taken this long to come through the process and complete this large phase III trial.”

“The drug optimisation process was relatively successful, and it's very gratifying for the team of chemists in Auckland that did the hard work to see it do well in phase III and come out as a leading compound of its type, Dr Smaill added. “There's no doubt it's a very good EGFR inhibitor clinically.”

Higher rates of adverse events, in particular gastrointestinal and dermatological-related, were associated with dacomitinb compared with gefitinib. However, the study authors suggested that it should be considered a new treatment option for these type of patients given its much superior efficacy and duration of response.

“Dacomitinib is a more potent, second-generation EGFR inhibitor that shares the issue of increased side effects in the skin and gastrointestinal tract, like afatinib,” said lead study author Dr Tony Mok, professor and chair of the Department of Clinical Oncology at the Chinese University of Hong Kong. “In spite of this, the activity seen in this study should allow for consideration of this effective therapy in this patient population.”

Encouraging signs dacomitinib could be approved

Asked whether the latest ARCHER 1050 trial results could help get dacomitinib over the line in terms of being approved for use in the treatment of patients with NSCLC, Dr Smaill expressed a high degree of optimism.

“We always knew it was a good compound based on the preclinical data…we knew it was one of the red hot compounds.  Although anything can happen, with Pfizer’s resources and expertise, such a big improvement [in PFS] – that’s statistically significant and prospectively demonstrated - I would say it's poised for approval,” he said.

“Research is a rewarding career.  If you have a great idea and really chase a goal – an optimised drug or an approach that you think [will work] – it can stand the test of time and it can make it all the way.  There is no doubt in my mind that New Zealand scientists are able to make a significant contribution globally.”