Cancer arises due to changes in DNA in a single cell.  Many changes are needed over time to a cell’s DNA to make it cancerous – which is why cancer is usually a disease of later life.  Yetas scientists have learned more and more about the DNA changes that combine to cause cancer, some patterns have emerged.

Cancer arises due to changes in DNA in a single cell.  Many changes are needed over time to a cell’s DNA to make it cancerous – which is why cancer is usually a disease of later life.  Yet as scientists have learned more and more about the DNA changes that combine to cause cancer, some patterns have emerged.

No matter which tumour type is being studied, a molecule called p53 looms large.  p53 is the most commonly mutated gene across all cancers, and most of the mutations to p53 are assumed to simply reduce its function.  p53 is often referred to as the classic “tumour suppressor” gene – it performs such important functions in normal cells that when these functions are lost due to mutations, tumours are much more likely to result.  However work by MWC Principal Investigator Professor Antony Braithwaite at the University of Otago is showing this well-known story in cancer biology has some subtle twists and turns.

As with all genes, the p53 gene in our DNA encodes proteins.  But importantly – like many other genes – the same sequence of DNA can encode several different versions of the p53 protein.  These proteins are called isoforms of p53, and many of them behave very differently.  In fact Antony’s team developed the first mouse model of one of these isoforms (called “delta-133”) and proved that it acted very differently from the main form of p53 that is so well known – and caused cancer through a completely different mechanism1. 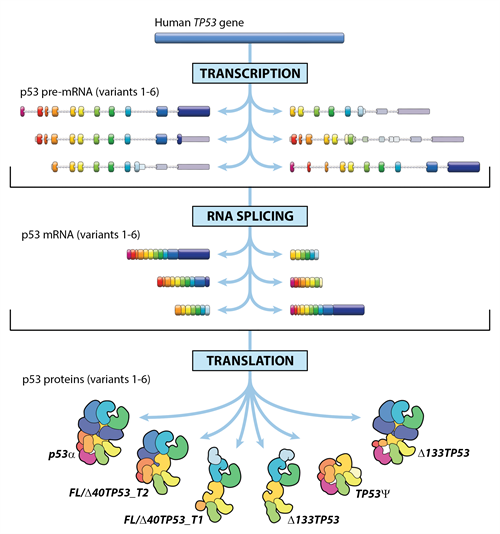 The results were dramatic!

With no IL-6, the levels of many markers of inflammation were reduced to normal levels, and the mice developed fewer cancers2.  The cancers that did arise did not spread as much to other tissues – an important finding given that such “metastasis” is a major reason why cancer causes so much damage to the human body.

These findings suggested that too much of the delta-133 isoform in human cancers might be particularly dangerous. To test this idea the team examined human bowel cancers.  They found that about 1/3 had high levels of isoform and this group of patients had the shortest survival2.  In other cancers, including the aggressive brain cancer glioblastoma3,  the team found groups of cancer samples with high levels of the delta-133 isoform.  These cancers also had high levels of a molecule called PD-L1 that stops immune cells from killing the cancer

These discoveries show that the delta-133 isoform of p53 is an important molecular link between inflammation and cancer.  They also remind us that even when you think you understand a cancer molecule really well, there are often surprises lurking in the alternative isoforms of proteins that the same gene can encode.

Click below for the links to the referenced journal articles