A high profile paper has highlighted the growing support the MWC is providing to NZ’s burgeoning clinical trials sector.

The paper in the world’s top liver medicine journal1 describes the first time patients with chronic hepatitis B virus (HBV) had been treated with the immunotherapy drug anti-PD-1.  The study was led by world-renowned Auckland hepatologist Professor Ed Gane, and conducted by Auckland Clinical Studies (ACS) on behalf of the sponsor, Gilead Sciences.  While Professor Gane has carried out numerous trials with ACS previously, this paper was the first that included highly sophisticated analysis of patient samples in the laboratory of MWC Director Professor Rod Dunbar.

New Zealand has a fast-growing research sector devoted to early-stage clinical trials, and is increasingly regarded as one of the most attractive countries in the world to trial new drugs.  Over a hundred clinical trials were carried out in New Zealand in 2019, and the sector now employs over 700 people, earning at least $150M per annum in export income.  However certain clinical trials require very sophisticated analysis of patient samples that is not available through New Zealand’s routine clinical laboratories, and this once made the country ineligible for some types of trials.

This is where the MWC’s development of world-class analytical capability stepped up.  In 2012 ACS needed to identify an Auckland-based lab capable of sophisticated blood sample analysis for a clinical trial sponsored by a major international pharmaceutical company.  ACS Managing Director Dr Christian Schwabe contacted Rod Dunbar to see whether MWC had the capability needed, and a partnership began that has now helped bring more than a dozen clinical trials to NZ.

Rod says the MWC’s long-term investment in building NZ’s technical capabilities in analysis of patient samples has brought benefits at many different levels.  He pays particular tribute to MWC Senior Research Fellow Dr Anna Brooks who has pioneered new flow cytometry techniques that pharmaceutical companies couldn’t access anywhere else in the world.  “Initially being able to provide sophisticated analysis of clinical trial samples helped attract more clinical trials to NZ, benefiting patients and the economy at the same time.  But as we’ve developed our technology, we’re been able to offer unique analytical services to international partners, even for clinical trials performed overseas.”  Many of these studies are also first-in-human studies of new therapies, so they are scientifically exciting as well.  In the recent paper with Ed Gane, a patient was cured of Hepatitis B by immunological manipulation typically used in cancer medicine.  This work proved that this type of immune therapy could have a role in treating a disease that still afflicts over 100,000 New Zealanders, especially Māori, Pacific and Asian people.  “It’s very exciting to help our leading clinicians bring such ground-breaking therapeutic approaches to diseases of importance to New Zealanders,” says Rod. 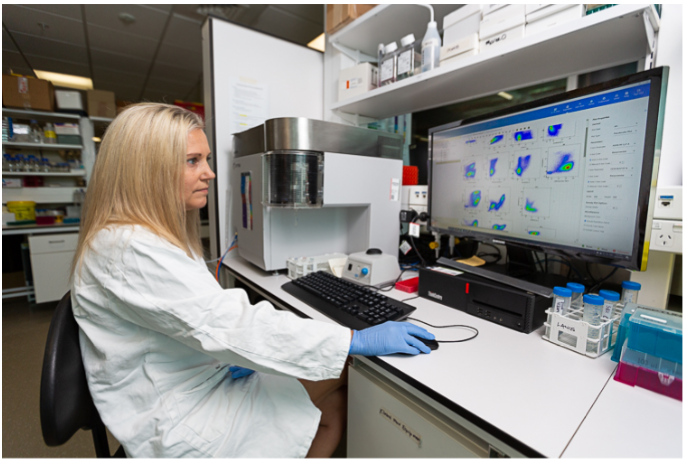 1. Gane, E et al (2019). Anti-PD-1 blockade with nivolumab with and without therapeutic vaccination for virally suppressed chronic hepatitis B: a pilot study. Journal of hepatology, 71(5), 900-907.