In 2015 Maurice Wilkins Centre investigators received a number of international awards that recognised their achievements in research and community service.

Distinguished Professor Margaret Brimble, a principal investigator with the Maurice Wilkins Centre, is no stranger to accolades, but in 2015 her achievements reached new heights when the International Union of Pure and Applied Chemistry (IUPAC) named her one of the year’s 12 Distinguished Women in Chemistry/Chemical Engineering. 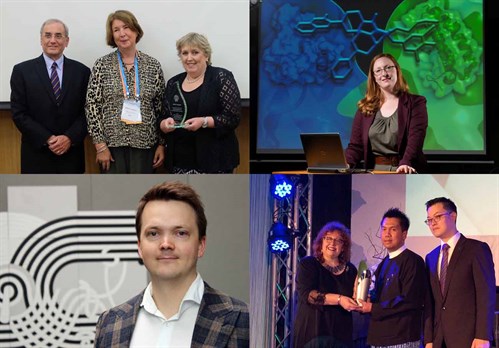 “I am delighted to accept this award as the first ever New Zealander to be selected,” says Margaret.

The award acknowledges and promotes the work of female chemists and chemical engineers. Awardees are selected based on excellence in basic or applied research, accomplishments in teaching or education, or demonstrated leadership and managerial excellence in the chemical sciences. The award also recognises women who have shown leadership and community service during their careers.

Affiliate Investigator Dr Htin Lin Aung was a Myanmar recipient of the NZ Association of Southeast Asian Nations (ASEAN) 40th Anniversary Awards. Last year, ASEAN and New Zealand celebrated the 40th anniversary of the formal partnership. The awards honoured forty people who had significantly contributed to New Zealand’s deepening relationship with the region. Htin received the award in recognition of his commitment to Myanmar – New Zealand relations and his work to build collaborations between the University of Otago and the Myanmar health sector. Htin is part of a research programme to develop a new generation of diagnostic techniques for drug-resistant tuberculosis (see story page 10).

Early career researchers affiliated with the Maurice Wilkins Centre were also recognised internationally in 2015. Affiliate Investigator Dr Francis Hunter, a postdoctoral fellow at the Auckland Cancer Society Research Centre, was a member of the winning team in the 5th Merck Serono Innovation Cup programme. The programme encourages early career researchers to work in teams to generate new innovative ideas for therapeutics and, with support from industry coaches, turn these ideas into business plans that are judged by a panel of experts. Francis was one of only 31 early career researchers selected for the programme from over 800 applicants worldwide. The idea for a novel cancer therapeutic proposed by Francis was selected as the €20,000 grand prize winner and is currently being implemented by Merck Serono.