The Auckland Bioengineering Institute (ABI), established by Maurice Wilkins Centre cofounder Professor Peter Hunter, is a lead player in international efforts to build comprehensive virtual models of the human body. In 2011 it published work on a new repository that makes it easier for researchers to share and use the information being gathered. 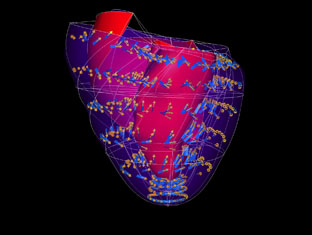 Scientists around the world are generating huge amounts of information about the human body in health and disease – from the minute scale of individual molecules through to whole organs.

The European Commission-funded Virtual Physiological Human (VPH) project aims, in the long-term, to link information across all of these scales to build comprehensive mathematical computer models that simulate the human body. Auckland is playing a leading role in both the VPH project and its international counterpart, called the Physiome Project.

To explain how such models might be used, Randall Britten, leader of the ABI software team, draws analogies to the airline industry.

Just as aircraft engineers use simulators to learn how design changes will affect the performance of an airplane, human models can help scientists understand how different biological conditions affect the body. And in the same way pilots learn to fly with a simulator, human models can be used by clinicians to hone their skills or trial different treatment options for their patients, or by researchers as part of the drug discovery process.

Behind all of this, however, is a massive computational challenge. Information gathered by various research methods – and addressing different aspects of human biology – must be represented in a mathematical form that can be read by computer, and stored in a central repository that allows component models to be connected and recombined.

The ABI is a global leader in the field, and has developed computer languages (FieldML and CellML) that are now the recommended standards for physiome research funded by the European Commission and National Institutes of Health.

It has also successfully combined models from different fields of study into world-first organ models. For instance, its heart model successfully integrates information about the muscular structure of the heart with molecular-level detail on everything from the biochemical mechanisms that govern the heart’s energy supply to channels for electrical signals that initiate the heartbeat, as well as many other cellular functions.

In 2011, researchers from the ABI published work on a new central repository that they are making freely available around the world via the Internet.

In contrast to an earlier version, the new repository has almost no restrictions on file formats, so models written in almost any computer language can be stored and used alongside each other. It also has a careful process for “version control”, recognising that each model is a work in progress, and that researchers combining several different models need to track when any component is updated.

The Maurice Wilkins Centre is one of several organisations that contribute funding to the VPH/Physiome Project, and it sponsors an annual event that brings the international modelling community together in Auckland.

Image: Model of muscle fibres and sheets in the heart, created by the Auckland Bioengineering Institute, and showing the kind of information that is incorporated into a comprehensive organ model. Image courtesy of the ABI