The Royal Society Te Apārangi has just announced that it has appointed Professor Emily Parker, a Principal Investigator at the Maurice Wilkins Centre based at the Ferrier Institute, Victoria University of Wellington (VUW), as a Fellow. 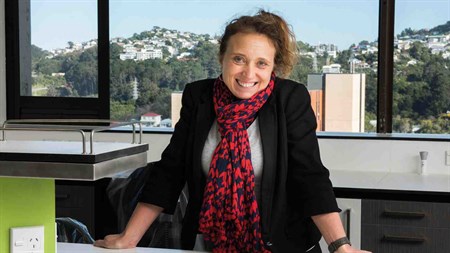 Emily received her PhD in Biological Chemistry at the University of Cambridge in 1996. Her recent research with the Maurice Wilkins Centre and Ferrier involves exploring the evolution and molecular details of enzymic catalysis and regulation, utilising a range of chemical and biochemical research techniques such as small molecule synthesis, protein engineering, and molecular and structural biology. Much of her team’s research aims to aid the development of novel agents with potential for use in treating tuberculosis and meningitis.

“It’s wonderful to see Emily’s work recognised with this appointment," said Professor Rod Dunbar, Director of the Maurice Wilkins Centre. "She is an outstanding scientist and also a natural leader who’s contributed hugely to many different scientific institutions in New Zealand.

Since her 2015 appointment as a Principal Investigator in the MWC’s management committee, Emily has led a number of successful initiatives, such as establishing the Early Career Researcher Steering Group, and co-directing two Flagship programmes, in Peptide and Protein Engineering and Anti-microbial Resistance.

"Emily is also widely recognised as a role model for New Zealand women in science, and effortlessly combines rigorous scientific practice with a compassionate approach to mentorship and the career development of other scientists," added Rod. "We are very proud to have her on the MWC team, and extend our warmest congratulations to her on attaining her FRSNZ.”