New Zealand on the map for novel antibiotic research

Their research outlines the possible re-engineering of the enzymatic assembly lines that make antibiotics. The team are particularly interested in molecules known as ‘non-ribosomal peptides’ and ‘polyketides’ that are made by bacteria and commonly have antibiotic activities that defend against other microbes.

“By re-engineering enzymatic assembly lines, we can potentially make interesting derivatives of these molecules that can get around bacterial resistance mechanisms,” says Associate Professor Ackerley. “However, our understanding of how key components of the assembly lines interact is still too limited for us to reliably achieve this.”

An estimated 700,000+ people worldwide die each year due to drug-resistant infections. The World Health Organisation characterises the problem as one of the biggest threats to global health today.

Associate Professor Ackerley explains that the standard approach to re-engineering enzymatic assembly lines is to take apart and re-assemble the modules.

“Nature has achieved this millions of times, but it doesn't generally work well in the lab.

“We took the same starting approach, but then added an additional step of mimicking evolution by introducing millions of small mutations and selecting the assembly lines that now worked best.”

The research team then looked for any hint of activity resulting from beneficial mutations by using two enzymatic systems that each produce a different brightly coloured product. This allowed the team to visually track improvements in their evolved and re-engineered enzymes.

The team was subsequently inspired to construct a bacterial map of New Zealand for the cover of Cell Chemical Biology. The map was drawn with Pseudomonas aeruginosa bacteria producing a yellow-green pigment, pyoverdine, in an ocean of Escherichia coli producing a blue pigment, indigoidine. 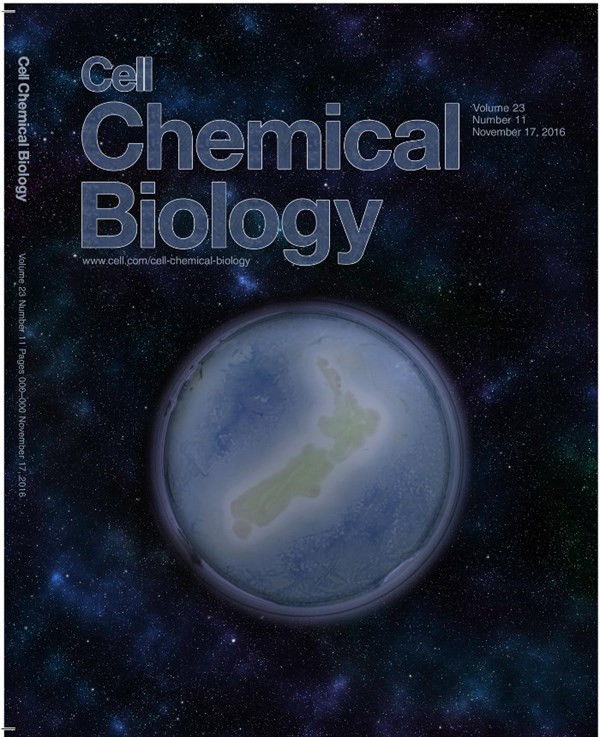