The Waharoa ki te Toi Health Research Centre at Kaitaia Hospital, a partnership between The Moko Foundation and the Maurice Wilkins Centre, opened on Friday 17 August.

The official opening of Kaitaia's Waharoa ki te Toi Health Research Centre formalises a partnership almost a year in the making. The centre has already commenced testing of patients as part of the nationwide CREBRF Study, the first of its kind, looking for potential links between peoples’ genetics and their risk of developing metabolic diseases such as diabetes and heart disease. It will also be investigating drivers of obesity in children. 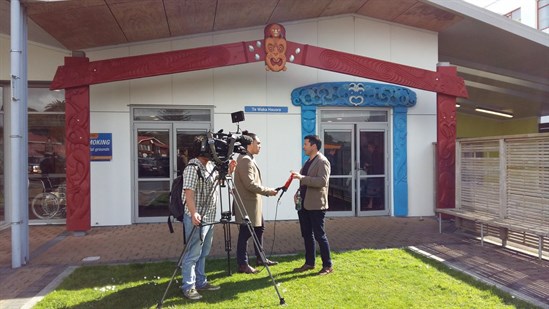 Media interviewing Dr Lance O'Sullivan, Founder and Chairman of The Moko Foundation, prior to the centre's opening.

“We are excited to have partnered with the Maurice Wilkins Centre to bring this opportunity to Te Hiku and it is the start of a number of projects we aim to see being delivered out of Kaitaia,” said Dr Lance O’Sullivan, Founder and Chairman of The Moko Foundation.

“Delivering precise treatments based on our individual genetic characteristics is going to be a big part of our future and this research is an exciting opportunity to further that knowledge and reduce the inequities in healthcare outcomes that are so prevalent in many communities throughout New Zealand. It also gives the opportunity for local clinicians to be involved in research that is relevant to their work.”

Waharoa ki te Toi was successful in gaining $500,000 of funding to establish and deliver a genetic programme run by and for the people of Kaitaia. The health issues that are being investigated cause significant health problems for communities such as Kaitaia, so the new centre is being seen as an opportunity to address these. 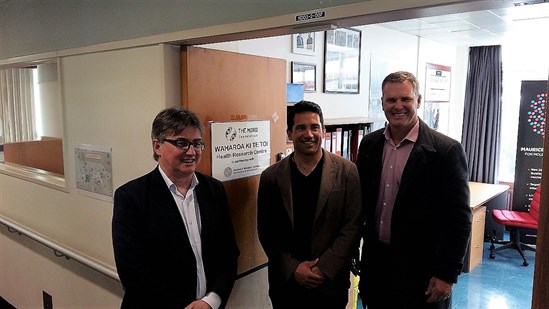 Newly announced Clinical Director of the Waharoa ki te Toi, Dr Joel Pirini, a local Māori Northland DHB doctor (Te Uri o Tai-Pawarenga) also employed by The Moko Foundation, said he is particularly excited about the application of this form of research to the local community. He also revealed that The Moko Foundation is proud to announce that recently knighted and respected kaumatua Sir Hekenukumai Puhipi is the patron of Waharoa ki te Toi.

“Papa Hector is the most appropriate person to be our patron for this exciting work,” said Dr Pirini. “Just like he used the stars and tides on his journey of cultural discovery, Waharoa ki te Toi will be searching for genetic variants or genetic stars that will allow us to chart a pathway to better health.”

Media coverage of the Centre's opening