Honours student Tom Wright, from The University of Auckland, has created a new kind of chemistry to dramatically simplify the manufacture of drugs targeting the immune system, and the technology has been patented. 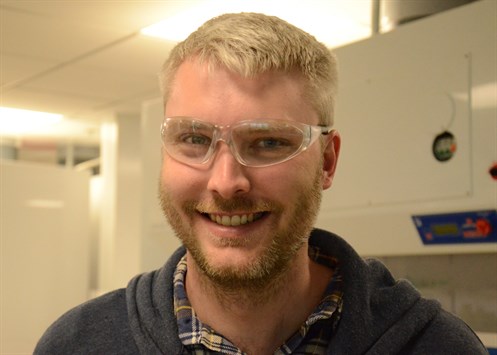 Tom’s discovery will be used to develop new peptide-based immunotherapies such as cancer vaccines, and the work may not be far from the clinic, as the new chemistry can be used in a manufacturing facility at The University of Auckland that was recently licensed by MedSafe to produce medicines for clinical trial.

Tom has developed a simple and elegant new method of joining an antigen (a signal for the immune system to attack a specific target) with an adjuvant (a general danger signal which helps the immune system recognise antigens as a threat it should respond to).

It allows the two to be connected in a single reaction, as opposed to the more complex multi-step process required by conventional chemistry. Essentially, it is a modular click-together system that allows many antigens and adjuvants to be joined quickly and easily, and the resulting compounds screened for useful biological activity.

The work has already appeared in Synlett and is soon to be published in Angewandte Chemie, one of the most prestigious journals in the field.

The antigens that have been tested to date are relatively short peptides.  The next step for the research group will be to trial the method on longer peptides that can be potentially be used to treat a wide range of cancer patients. As for Tom, though, he’ll soon be off to Oxford after winning a Rutherford Foundation scholarship for his doctoral studies there.

The work has also led to the creation, with Dr Anna Brooks in Rod’s laboratory, of a new means of testing compounds like these using human blood samples. Because blood contains the mix of immune cells and chemicals found in the body it provides an immediate indication of the human immune response to these molecules.