Founding Chair named Fellow of The University of Auckland

William Falconer CNZM LL.B. has been named a Fellow of The University of Auckland. The honour, conferred during Autumn Graduation, recognises his outstanding contribution to the University as Founding Chair of the Board of the Maurice Wilkins Centre for Molecular Biodiscovery.

Fellowship recognises unique and valuable contributions to the University and has been awarded to just fourteen people since 2005. “Mr Falconer has been a highly effective leader within the University and a devoted supporter of the Maurice Wilkins Centre,” said Vice-Chancellor Professor Stuart McCutcheon in a citation read at the graduation ceremony. “He has also been an outstanding ambassador for the University in the wider community.” 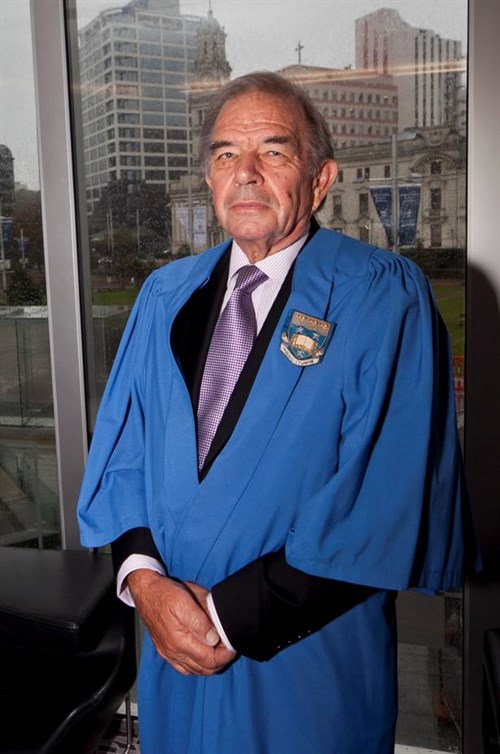 Mr Falconer, who has had a notable career in government and business, was invited to join the Board of the Maurice Wilkins Centre on its establishment 2003. “As Founding Chair he has guided the development of the Centre throughout the subsequent seven years,” said Professor McCutcheon. “The current strength of the Maurice Wilkins Centre as a national scientific centre of excellence is in no small way a tribute to his expert stewardship. His wide range of skills and experience made him uniquely qualified to lead the Centre.”

“At the time of Mr Falconer’s appointment, to what was then the Centre for Molecular Biodiscovery, there was little guidance as to how such Centres of Research Excellence – a new government initiative – should be managed. The situation required wise and thoughtful guidance to allow the Centre to develop in a way that gave the investigators room to pursue goals of scientific excellence, while at the same time maintaining a strategic eye on changing government priorities and societal expectations.”

As well as providing invaluable advice and oversight during this initial phase, Mr Falconer made critical contributions in 2007 when existing Centres of Research Excellence were required to compete for further funding. He provided enormous support to the Director, Distinguished Professor Ted Baker, as the Centre prepared for this process. He also gave an authoritative analysis of the place of the Centre in New Zealand, helping to ensure that it was selected for a further six years of funding, at a significantly enhanced level. Since then his continued input has helped the Centre to evolve further in directions that will enhance its national strength and significance and he remains a key advocate nationally.

Mr Falconer has had a noteworthy career in government, concluding as Deputy Secretary of Energy from 1980-1985, and in business as a professional company director for more than 25 years. He was made a Distinguished Fellow of the Institute of Directors in 2006 and has chaired many organisations including Maui Development Ltd, the Natural Gas Corporation, Southern Petroleum, St Lukes Group, the Accident Compensation Corporation, The Environmental Risk Management Authority, Hellaby Holdings and Restaurant Brands. He is currently the Chair of the Primary Growth Partnership Investment Advisory Panel, of Rowing New Zealand and of the Meat Industry Association.

Mr Falconer was one of four new Fellows of The University of Auckland named at Autumn Graduation, joined by Associate Judge David Abbott, President of The University of Auckland Society; Sir Tīpene O’Regan, Chair of the Board of Ngā Pae o te Māramatanga; and Alison Paterson, inaugural Chair of the Board of the National Research Centre for Growth and Development.