Maurice Wilkins Centre researchers at the University of Otago have reported a discovery that may lead to the development of new drugs capable of treating tuberculosis, which kills more people worldwide than any other infectious disease.

There are about 1.7 million deaths attributed to tuberculosis (TB) each year around the world, and the incidence of drug-resistant TB is increasing.

Professor Greg Cook, MWC Principal Investigator at the University of Otago’s Department of Microbiology and Immunology, and Postdoctoral Fellow Dr Kiel Hards, have been investigating the properties of Bedaquiline, which in 2012 became the first new TB drug to come on to the market in decades.

“Bedaquiline is the first new drug to be developed after 40 years of searching for more effective drugs that combat TB,” says Professor Cook.

“But one drug won’t be enough to reverse a 40-year lull in drug-development, so our lab is actively searching for new TB drugs to complement Bedaquiline and expand the treatment options available to clinicians world-wide.”

Understanding why Bedaquiline works so well in the first place is the key to developing even better drugs to combat TB, says Dr Hards.

“The most promising aspects of the drug are its ability to shorten treatment timeframe to eight weeks and that its target is unconventional for an antimicrobial. Bedaquiline disrupts the ability of M. tuberculosis to generate energy,” Dr Hards explains.

“What we discovered is that the drug has a second activity or property that may explain how it is able to kill non-replicating cells. This second activity (termed ionophoric) involves the movement or shutting of ions across the mycobacterial membrane resulting in the dissipating of critical ion gradients needed for growth and survival.”

The researchers’ findings, which were recently published in the international journal Proceedings of the National Academy of Sciences (PNAS), could have ramifications for other antibiotics. 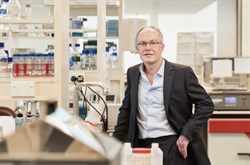 Professor Greg Cook, MWC Principal Investigator in the Department of Microbiology and Immunology,University of Otago.

Many other antibiotics may work by this same mechanism, says Professor Cook.

“We believe that we can design more effective TB drugs if we include ionophore-like properties in a similar way to Bedaquiline,” he says.

“The ‘biological electricity’ that these ions normally create is key to energy generation and a whole series of other incredibly important cellular processes. It was already known that disrupting these ion gradients is lethal to M. tuberculosis but before Bedaquiline there were no drugs that could do this and be safe in humans.”

“Many researchers are now turning their attention back to focusing on how antimicrobials actually kill bacteria to uncover new pathways of cell death,” Professor Cook adds. “These offer tremendous potential to develop new antimicrobials.”

This research, which is directly funded by the Maurice Wilkins Centre, is an excellent example of the exciting work that has been done and which is ongoing within the Centre's TB Flagship Research Programme.