Investigating a bacterial 'master' of disguise

MWC researchers have revealed a unique protein in a common bacterium that helps it disguise itself from immune attack. This discovery could help in development of new antimicrobials or vaccines.

Staphylococcus aureus is found on many areas of the healthy human body including the skin, nose and airways. When wounds occur or the immune system is weakened, this bacterium can invade host tissue and cause a range of diseases from skin infections through to heart disease. Many types of S. aureus have also become resistant to antibiotics, such as the well-known methicillin-resistant S. aureus (MRSA) that causes such problems in both hospitals and the community. New antibiotics are needed to fight these kinds of serious infections, although vaccines to help prevent them would be even more beneficial. Studying the molecules made by S. aureus helps both approaches.

S. aureus makes proteins called ‘virulence factors’ that help it to invade host tissue and evade detection by the host immune system to avoid being destroyed. MWC research groups led by Professors John Fraser and Ted Baker have a long track record studying how these virulence factors work. This will allow the development of antivirulence therapies - antimicrobials that are designed to disarm the bacteria by targeting these virulence factors.

Two ‘families’ of these proteins are known as ‘superantigens’ (SAgs) and ‘superantigen-like’ (SSL) proteins. The SSLs attack the first lines of defence in the body, by disrupting the ‘innate’ immune system. The SAgs interfere with the body’s ability to produce effective antibodies against the bacterium – part of the ‘adaptive’ immune system. Together, these proteins help S. aureus cause disease and evade immune defences.

MWC Research Fellow Dr Ries Langley was working on SSL proteins when he came across a virulence factor known as ‘Staphylococcal enterotoxin-like X’ (SElX).
“I first became interested in this protein as it had similar features to the SSL proteins and then another group published a paper describing it as a SAg. We used a number of different biological testing systems to work out what SElX does and showed that the protein had both SAg and SSL functions that were independent to each other.” This is the first and to date only virulence factor discovered that could work in a dual capacity to disrupt both the innate and adaptive parts of the host immune system.

Crucially, Ries and his colleagues were also able to generate a very detailed 3D map of the SElX protein using a technique called X-ray crystallography and advanced computer programmes. They were able to use this map to identify the key areas of the protein involved in protecting S. aureus from host defences and have published this and the functional data in 2017*. Further study of how SElX and other virulence factors enable S. aureus to evade the immune system will help to inform the design and development of new vaccines and antimicrobials to fight ‘superbug’ infections in future. 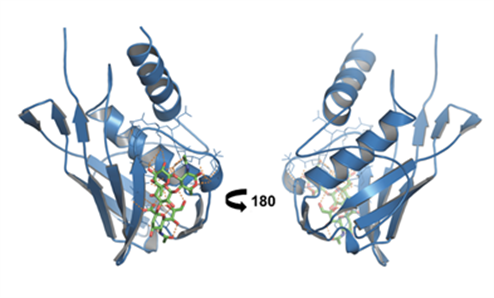