A high-powered new virtual environment that allows researchers to screen thousands of molecules as potential new drug leads was launched in 2010, providing a major boost to Maurice Wilkins Centre researchers and their collaborators.

“Commercial compound libraries have put millions of chemicals at our disposal, and by screening with computer models that can predict molecular behaviour, we can identify compounds that might be a good starting point for new drugs.”

Jack and his team use two main approaches. The first is to begin with the 3D structure of a protein implicated in disease and search for compounds capable of binding to it, thereby altering its function. The second is to start with a compound that has useful biological activity and search for others that may behave in a similar way but are more suitable as new drug leads.

“We might start by selecting a hundred thousand compounds from libraries we’re interested in and filter them through the virtual screening process. From the prioritised results we can select a much smaller number – tens to hundreds of compounds – for testing in the laboratory,” says Jack.

“Once a promising compound has been shown to have biological activity, our medicinal chemists can begin to synthesise variations on that lead.”

With the computer resources in Jack’s laboratory, it used to take several weeks to screen around 100,000 compounds.

With funding from the Auckland Medical Research Foundation, he worked with Nick Jones from The University of Auckland’s Centre for eResearch to custom-build a new virtual discovery environment that has already cut the process down to days, and may eventually reduce it to hours.

Launched in 2010, it uses the high-performance computer infrastructure and custom solutions provided by the Centre for eResearch’s broadband-enabled science and technology grid (BeSTGRID). 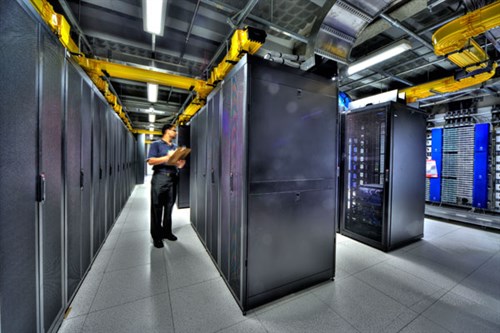 With support from the university’s BioPharma Research Initiative, a user-friendly interface was developed to aid collaboration with researchers outside Jack’s laboratory.

The virtual screening environment is already being used by other Maurice Wilkins Centre investigators.

For instance, Dr Chris Squire, from The University of Auckland’s School of Biological Sciences, is using the system to search for new inhibitors of an enzyme that alters the activity of an anticancer drug.

The system also opens up new opportunities for postgraduate students, who are now doing work that would not previously have been possible within the timeframe of their research projects.

Image: High-performance computer equipment at the BeSTGRID facility at the University of Auckland. Photo courtesy of Godfrey Boehnke.