Turning the tables on cancer

Tumours often contain areas with less oxygen than is found in normal tissues. These areas are less vulnerable to many forms of cancer therapy and often drive development of a more aggressive disease state. However, Maurice Wilkins Centre scientists have learned to use the lack of oxygen in tumours to their advantage 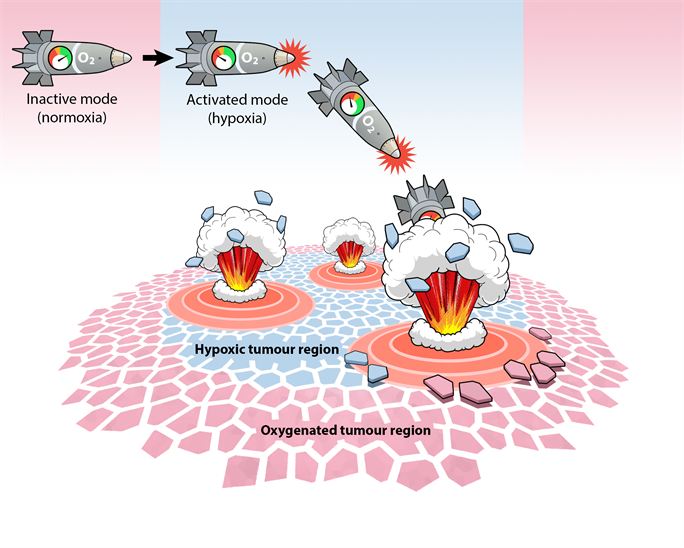 Two drugs invented by a team of Maurice Wilkins Centre investigators at the Auckland Cancer Society Research Centre are heading to clinical trials to test their effectiveness in cancer patients. The clinical trials will be run by two new drug companies, Convert Pharmaceuticals and Rain Therapeutics, that in 2018 raised more than NZ$50M to support development of the drugs.

The team that invented these drugs is led by cancer biologist Associate Professor Adam Patterson, and medicinal chemist Associate Professor Jeff Smaill, and has been supported by a Maurice Wilkins Centre Flagship Programme, as well as funding from the Health Research Council of New Zealand, the Ministry of Business, Innovation and Employment, Cancer Society Auckland Northland, and Auckland UniServices.

Adam and Jeff’s team have refined and optimised technology originally developed over decades by Maurice Wilkins Centre investigators Professors Bill Denny and Bill Wilson. This technology allows production of drugs that only become toxic to cells in low oxygen environments such as tumours, minimising their effects on healthy cells. The new drugs, one actively in a Phase 2 trial, the other expected to soon begin a Phase 1 trial, firmly establish New Zealand as the world centre for developing this type of drug – termed “hypoxia-activated prodrugs” or HAPs.

Although previous HAPs have failed in clinical trial, Jeff and Adam's team have made significant headway in the design and pre-clinical validation of a new generation of HAPs to circumvent the limitations of previous designs. “This area of drug design is very complex. The devil is in the details of how each compound is fine-tuned for precise activation under low oxygen conditions. It is also critical that the clinical development is informed by the use of appropriate biomarkers of response,” said Jeff. “Selecting patients that have the potential to respond is very important.”

“This Flagship programme demonstrates that to develop new cancer drugs we need to invest in people who understand both the biology and chemistry of their field at a very deep level”, said Professor Rod Dunbar, Director of the Maurice Wilkins Centre. “Even when earlier generation drugs fail in clinical trials, this depth of understanding ensures that we can learn from the clinical data, and design next generation drugs that are more likely to help patients.” Associate Professor Adam Patterson added that: “It demonstrates the importance of having an organisation like the MWC backing teams like the one we’ve formed, especially through times when the world has neglected certain approaches to drugs because of prior clinical failures. Without MWC support for our programme, it would have been very difficult to sustain.”