Maurice Wilkins Centre investigators at the University of Auckland are world leaders in discovery of new cross-links in proteins. 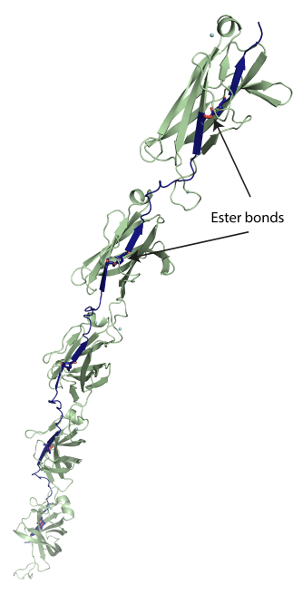 Research fellow Dr Paul Young loves delving beyond the visible to see not just the microscopic detail of bacteria, but the atomic detail of their proteins.

Not only is this immensely satisfying for this young scientist, but he and his colleagues’ explorations are leading to unprecedented discoveries that have been published in leading journals including Science.

The scientists are part of a structural biology group led by Professor Ted Baker, and affiliated to the MWC, that is funded to research bacterial structures.

They recently discovered two different and unusual kinds of cross-links inside the elongated proteins (pili) that gram-positive bacteria use to cling to surfaces. These bonds between amino acid side chains greatly strengthen the proteins, and the team is working to understand how and why they form, and how widely they occur.

These discoveries build on initial work by a team of researchers in Ted’s group using X-ray crystallography to solve the structures of proteins involved in pili formation in Streptococcus pyogenes, the organism responsible for many serious human diseases including rheumatic fever.

“Unlike gram-negative bacteria, which have comparatively thick pili that are fairly easy to see, gram-positive bacteria were thought to lack pili. Our structures explained why these pili had never been observed - they are just one protein thick” Paul says. “The structures also explained why, even when so thin, they are incredibly strong. The pilus proteins contain internal covalent bonds between amino acid side chains (isopeptide bonds).”

The team then wanted to know what other proteins might contain these bonds and, during this search, discovered another completely novel kind of covalent bond. “They were ester bonds with completely different chemistry to isopeptide bonds,” Paul explains.

Just as interesting, he adds, was the placement of the bonds. “Like isopeptide bonds they are between the first and last strands of the protein, where the most stress is. We are witnessing convergent evolution here, with bacteria using different mechanisms to stabilise the same position that receives the most mechanical stress.”

In November 2014, Paul and Ted, along with Drs Chris Squire and Paul Harris, were awarded a Marsden Fund grant to fully understand the nature of these bonds. In the future they aim to be able to engineer super-stable artificial proteins capable of assembling into nanoparticles for industrial applications. They are also using their knowledge of streptococcal protein structures to help Associate Professor Thomas Proft and Dr Nikki Moreland at the University of Auckland develop a new vaccine candidate for the prevention of rheumatic fever.

The team continues to question whether even more bizarre and unusual cross-links might exist in bacteria living in extreme environments, for example those growing at high temperature and pressure. Answering such fundamental questions will continue to deliver exciting new science as well as opening up new opportunities in disease prevention and treatment.

Image: A model showing how ester bonds form part of a single chain or string (blue) that runs continuously from the bottom to the top of the long bacterial protein. © Dr Paul Young