School students get into hot water (2011)

With a blessing from Ngati Hei – and a polite request for tourists to move from their bathing holes – a unique experiment got underway at Hot Water Beach on the Coromandel Peninsula in early 2011. 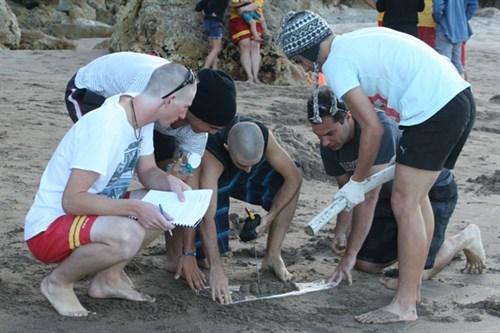 Over a full weekend in April, around sixty secondary school students took samples from the thermal springs that well up on the beach between high and low tide, and performed genetic analyses to identify the heat-loving microorganisms that live there.

The research – known as a metagenomic study – was the first of its kind in such an environment. It will form the basis of Massey BSc honours student Veronica Benton-Guy’s dissertation and a paper for submission to a scientific journal.

Paul spotted the opportunity the previous year, when he won a Maurice Wilkins Centre scholarship to attend the Queenstown Molecular Biology meeting.

“At the conference I learned about DNA sequencing and its impacts on research, and when I visited the trade centre, [biotechnology company] Roche was inviting proposals for scientists to win free use of their sequencing machine,” Paul explains.

“I asked whether they would consider a school using the technology and they really warmed to the idea.”

A fellow conference delegate, Justin suggested that a metagenomic study would make good use of the machine’s capabilities. “Since our school is based at the beach, we thought about the marine environment,” Paul says, and Hot Water Beach would provide a novel setting for the research. Justin wrote up a proposal that won the Roche competition, and subsequently secured additional funding for the project from Massey University and the Maurice Wilkins Centre.

“It was a real collaboration between the scientists and teachers,” Justin says. A large team from Massey brought all the equipment and supervised the students. “We streamlined the experiment as much as possible but it was still quite lengthy, and the students did really well.”

Paul invited students from three further schools take part, all of whom were learning about DNA technology in their Year 13 biology classes. The students extracted DNA from the samples and amplified genes that could identify the microorganisms. The material was sent to Roche for sequencing and the results will be published soon.

“We gave lectures to reinforce what the students were learning about gene amplification and DNA sequencing as part of the curriculum, and Paul really integrated it into their studies,” Justin says.

“The project linked well with the qualifications our students are working towards and was a very authentic learning experience,” Paul adds. “It gave them access to equipment that schools cannot provide, and meeting the scientists may have challenged a few stereotypes. A survey of the students – by Rose Hipkins from the New Zealand Education Research Council – gave us very encouraging feedback,” he says.

The project was such a success that Justin plans to adapt it for use by schools nationwide and Paul is creating related resources for teachers.