Distinguished Professor Margaret Brimble is proud of her discovery, for women, by a woman. 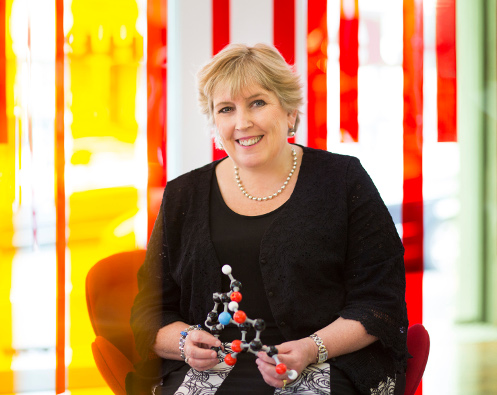 MWC Distinguished Professor Margaret Brimble is excited about the new synthetic peptide drug that she has developed and its potential to treat Rett Syndrome and other disorders.

The drug, now named Trofinetide (formerly NNZ-2566), is being developed by Neuren Pharmaceuticals after being granted Orphan Drug status for Rett Syndrome by the Food and Drug Administration (FDA) in the USA following Phase 2 clinical trials.

Rett syndrome is a rare medical condition affecting about one in 12,000 people almost exclusively females. In New Zealand, this means three or four cases a year. Babies exhibit no outward signs of the syndrome at birth and seemingly achieve developmental milestones as expected. Symptoms of the severe neurodevelopmental disorder manifest at around six to 18 months with the loss of acquired motor and language skills.

“When I first began work on this I wasn’t even aware of Rett syndrome,” says Margaret. Having since observed young patients she says, “As a mother I know now how devastating it must feel.”

A leading expert in medicinal and natural products chemistry, Margaret was in Paris this year attending the L’Oréal-UNESCO Women in Science Awards. She is proud that as a recipient of this prestigious prize she can give back to the female community a drug that promises to transform lives.

“It’s been 14 years in the making, from the discovery of the molecule followed by a series of clinical trials in animals, healthy human volunteers and finally Phase 2 clinical trials on patients with Rett Syndrome,” Margaret says.

“The molecule proved challenging to make but we battled away... We first came up with about 140 different compounds and whittled these down to four before finding the magic one to take to clinical trial,” she says. MWC Associate Investigator Dr Paul Harris carried out the chemistry under Margaret’s supervision.

The medical implications of Margaret’s discovery are momentous enough but there is added cause for congratulations. Margaret is the first female scientist in New Zealand to have a drug registered with the FDA.

“It’s an amazing story. I’m so proud that this is a drug for women, developed by a woman, and discovered in an academic scientist’s medicinal chemistry laboratory!”