A comprehensive independent assessment found the Centre to be performing at a high level, producing distinct and positive benefits for New Zealand. It also enabled re-configuration of the MWC’s major research programmes to take advantage of new opportunities.

The MWC undergoes regular reviews to ensure it is meeting its goals and performance criteria set by the government. These include the mid-term review at the half-way stage of each 6 year funding cycle, the most recent of which was conducted in 2017 by the Royal Society of New Zealand (RSNZ).  As part of the process, an international scientific advisory board (SAB) was convened in late 2016 to review the MWC’s progress and ongoing plans. In its findings, the SAB endorsed the Centre’s work, as well as its strategic direction. “As in previous years, it is the unanimous view of the SAB that the quality of the science undertaken by the MWC is outstanding,” the SAB report stated. “We are also delighted by the progress of the MWC in establishing a highly collaborative, multidisciplinary and multi-institutional structure that sets a standard to which universities and associated research organisations anywhere in the world might well aspire.”

After considering the SAB assessment, other reports and an interview session with the MWC management team, the RSNZ panel’s findings were very positive. It was particularly impressed with the Centre’s level of research excellence and potential impact in New Zealand. MWC Director, Professor Rod Dunbar, says: “The mid-term point was an opportunity for us to review and revise our priorities for the remainder of the current funding cycle. The clear advice we received from the SAB was to maintain momentum in our successful larger-scale programmes for 2018-20 while continuing to foster the most exciting new research within our network.” 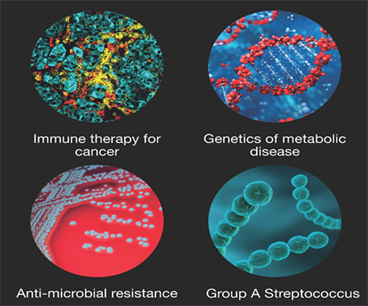 Subsequent discussion and workshops led to changes in the MWC’s research themes for 2018-20.The Centre’s current Flagship research programmes will all be continued, but have been re-configured into four larger-scale programmes, to take advantage of emerging synergies between the research teams; Immune therapy for cancer, Genetics of metabolic disease, Anti-microbial resistance and Group A Streptococcus. The consolidation of the MWC’s themes provided the opportunity to support new research themes in exciting new areas. A new theme entitled ‘Advanced cell and tissue culture technology’ will bring together New Zealand’s expertise, and have particular focus on new human stem cell technologies, immune cell therapy, and engineering of 3-dimensional human tissues. In addition, budget has been set aside to enable selection of new Flagship programmes in 2018.

The MWC is grateful to all those involved in thoughtfully reviewing its programmes, and ensuring they take the best advantage of both existing strengths and new opportunities