Maurice Wilkins Centre is one of two Centres for Research Excellence to have their funding renewed. 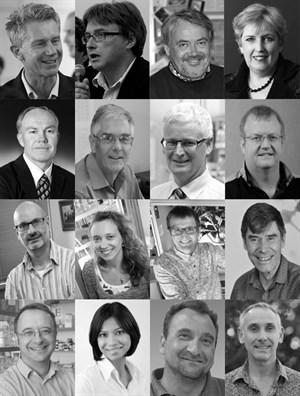 Maurice Wilkins Centre is delighted to see its funding renewed until 2020, with a significant lift in investment from the government to $42.6 million over six years, from $23 million previously. “This is a huge vote of confidence in our achievements, our strategy and our people,” MWC Director Professor Rod Dunbar says. “The new funding allows us to expand our programme substantially, and increase our impact on major health issues affecting New Zealanders. We’ll also be able to support a larger scientific workforce, especially our most promising early career scientists.”

MWC Governing Board Chair Bill Falconer says the continuation of the MWC’s funding recognises the principle characteristics of the Centre: collaboration and focus.

Founded in 2002, MWC is one of seven original Centres of Research Excellence (CoREs) established by the Government to underpin world-class research efforts in New Zealand. MWC was created by linking five high-performing research groups at the University of Auckland in biology, chemistry, engineering and medicine, with collaborating researchers around the country. Since then MWC has strategically expanded its network to incorporate most of the country’s expertise in discovering new therapies and diagnostics for cancer, infectious disease, and diabetes.

This nationwide reach is reflected in the new management committee which includes five new principal investigators (PIs) – Professors Antony Braithwaite, Greg Cook, and Dave Grattan from the University of Otago; Associate Professor Ian Hermans of the Malaghan Institute of Medical Research and Victoria University Wellington; and Professor Emily Parker of the University of Canterbury. Emily says she’s proud to be part of the refreshed leadership. “It’s a diverse group of people who are dead-set on delivering on our mission and creating opportunities for new therapeutics in New Zealand.”

In the latest funding round, MWC competed against 26 other applicants, and underwent both rigorous international scientific review, and a site visit from a panel of leaders drawn from science, education, and business. Six CoREs were funded – four new Centres, and two existing CoREs, the MWC and the MacDiarmid Institute.

“As we move into this third funding period, I am sure we can expect to see MWC scientists continuing to make a significant contribution to the wellbeing of New Zealanders, and extending their collaborative model internationally,” Bill says.

Building on the work described elsewhere in this report, the re-invigorated MWC will focus particularly on developing new cancer drugs, including immune therapies, and targeting rheumatic fever and tuberculosis – all areas of research crucial to New Zealand with potential global impact.