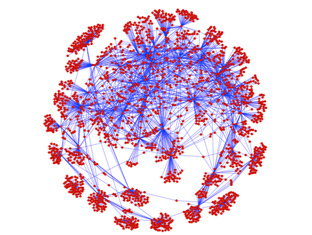 “The recent explosion in our knowledge of the human genome, and the complexity of the signalling pathways that control gene activity, means that biologists routinely work with massive amounts of data. Collaboration with computational scientists has become extremely important to manage and find patterns in the information.”

To date they have measured changes in the activity of more than 30,000 genes in human melanoma and breast cancer cells subjected to more than 70 genetic modifications in the laboratory.

By identifying genes switched on or off under different conditions, they could build computer models of the signalling pathways within the cells.

Multiple computer modelling techniques were used to extract as much information from the data as possible.

“Combining several different techniques to generate our model was a real challenge. It represents a significant advance in computer modelling of biological systems, and we have been invited to present the work at international meetings,” says Daniel.

An important outcome was the identification of a set of potential “master regulators” of melanoma cell signalling, several of which control whole clusters of genes.

The master regulators controlled tumour cell growth and DNA repair in the laboratory and were strongly associated with the survival of melanoma and breast cancer patients. The research team hopes to investigate their role in cancer further.

As well as laying the groundwork for new computer models of cancer cells, Cristin says that Daniel’s work provides an important link with whole tissue research.

“Our colleagues Edmund Crampin and Professor Peter Hunter at the Auckland Bioengineering Institute are building virtual models of major tissues and organs, and to do that effectively it will be important to understand what is happening down to the level of cells and molecules.”

The researchers are now making their techniques available to others. Daniel has created a suite of web-based tools for scientists to build and compare their own virtual gene networks and identify key features for further evaluation in the laboratory.

Daniel’s research, completed in 2010, was funded by a University of Auckland Scholarship with additional support from the Maurice Wilkins Centre and the Auckland Bioengineering Institute.