Researchers in the MWC’s Tuberculosis Flagship Research Programme have had their long hours in the lab recognised through publications in world-leading journals.

Tuberculosis (TB), a highly contagious airborne disease caused by the bacterium Mycobacterium tuberculosis, is a leading cause of mortality worldwide – responsible for about 1.7 million deaths in 2016 according to the World Health Organisation. Of major concern is the increasing number of TB cases caused by multi-drug-resistant (MDR) or extensively-drug-resistant (XDR) strains. Only 50% of those that start treatment for MDR-TB are cured with current therapy. The MWC’s TB Flagship brings together investigators from different institutions in New Zealand and supports a multipronged approach to tackling TB. Professor Greg Cook and his team at the University of Otago, for example, are looking for effective targets for anti-TB agents, while Professor Margaret Brimble’s team at the University of Auckland are synthesising and assessing the potential of new agents to hit novel targets.

“The molecules within TB bacteria that generate energy are the most exciting new targets, and our team has identified several new drug-like molecules that can block energy production. We are currently testing variants of these molecules for their effects on TB bacteria, to identify drugs we can take towards clinical trials,” says Greg. “Our ultimate goal is to discover new drugs that act fast against MDR- and XDR-TB.

An innovative approach to combatting drug-resistant TB was also reported in the Proceedings of the National Academy of Sciences by Greg, his Otago colleague Dr Kiel Hards and a team of international collaborators*. The team studied a promising drug that effectively targets a protein within TB’s energy generating machinery. This drug stops the bacteria from growing but does not kill them. The team then used gene deletion techniques to show that the drug would be lethal to TB if a second protein within the same molecular pathway was also targeted. This work shows a clear pathway towards combination drug therapy that will kill all TB, including the strains that are resistant to current drugs. 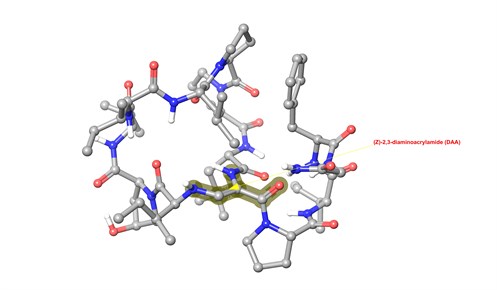 Meanwhile, Professor Brimble, PhD student Shengping Zhang, MWC investigators Dr Paul Harris and Professor Cook, and colleagues, completed the first ever synthesis of callyaerin A, a naturally occurring product with high levels of potency against M. tuberculosis. Callyaerin A is a molecule with a unique structure with a feature that only occurs rarely in nature (technically it’s a cyclic peptide with a rare (Z)-2,3-diaminoacrylamide motif). The team showed that this rare molecular feature is crucial to its activity against TB. The work was published in 2018 in leading chemistry journal Angewandte Chemie and designated as a ‘very important paper’ (VIP) and featured on the coveted cover page of the print version**. The paper was also highlighted in Chemistry Views. “It's the first synthesis of a naturally occurring peptide active against TB containing that particularly challenging structural feature. So that in itself was a significant chemistry feat,” says Margaret.

Thumbail and image courtesy of Margaret Brimble and Allan Zhang