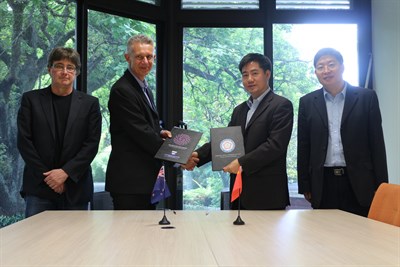 In 2014 MWC continued to play a central role in developing the scientific relationship between New Zealand and China. Chinese President Xi Jinping visited New Zealand in November, and commented that co-operation in bio-medicine was one of the “new bright spots” in relations between the two countries. During his visit, he confirmed more than 20 agreements aimed at strengthening ties, including one between the MWC and the Guangzhou Institutes of Biomedicine and Health, part of the Chinese Academy of Sciences.

“This agreement provides an excellent mechanism for synergy and collaboration since it enjoys a high level of backing from both governments,” says MWC Deputy Director Professor Peter Shepherd.

Through the agreement, New Zealand and China have the opportunity to work jointly on stem cell therapies, diabetes, immune therapy for cancer, and drug discovery projects.

“These are fields where the world is advancing extremely rapidly. New Zealand needs to be up to speed and well-positioned, and this alliance helps us stay at the forefront,” Peter says.

The agreement enables MWC to act as a conduit for researchers throughout New Zealand to access research collaborations in China. It also allows New Zealand biomedical research to present a united face in China, facilitating scientific exchange and development of deep institutional and governmental partnerships. The agreement builds on successful collaborations with China initiated by the MWC, which include two research grants to develop anti-cancer drugs awarded in 2013 through the inter-government Strategic Research Alliance.

Meanwhile relationships with key institutions in the USA also strengthened in 2014. An MWC delegation drawn from five New Zealand universities met with leading researchers at Albert Einstein College of Medicine (AECOM) in New York. The group held two research symposia with US teams led by Professors Bill Jacobs and Vern Schramm. Also present were Drs Shivali Gulab and Scott Cameron from Victoria University Wellington who are on secondments to AECOM, and Gert-Jan Moggré, a visiting student from Professor Emily Parker’s group at the University of Canterbury. New joint projects in tuberculosis and cancer were initiated, building on the strong links already established between MWC investigators and AECOM staff.

Four of the MWC delegates also travelled to Colorado State University at Fort Collins to visit the Mycobacterial Research Laboratories, where Associate Professor Shaun Lott from the University of Auckland was already based on a sabbatical exchange.

“Colorado State University has extensive expertise and facilities for tuberculosis research, and leads US academic efforts in this field, so building and extending existing collaborations is really important for MWC’s tuberculosis programme,” says Emily.

Image: from left to right - Deputy Director Professor Peter Shepherd and Director Rod Dunbar from the Maurice Wilkins Centre (MWC), and Professor Guanghao Chen and Professor Donghai Wu from the Guangzhou Institutes of Biomedicine and Health (GIBH) sign the Memorandum of Coopoeration between MWC and GIBH.
Image courtesy of Peter Lai