As the founding director of the MWC moves into retirement, he talks of the triumph of relationships and the importance of simply “getting started”. 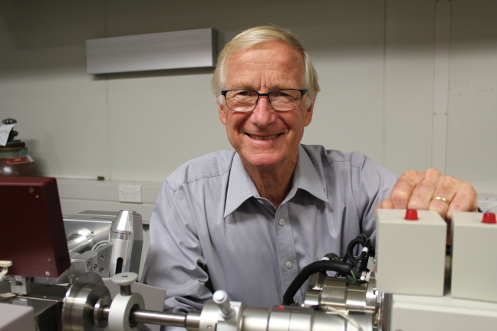 Professor Edward Neill Baker, or Ted as he’s best known, is proud of the relationships MWC has forged internationally; essential given New Zealand’s small population. The networking achieved within New Zealand is also a triumph.

“I think what MWC has done best is to extend its excellent science into strong, collaborative relationships involving people who have never worked together before,” he says.

“I am also thrilled to see how our fundamental research is now being translated within the MWC into real advances in human health and wellbeing. So long as we maintain both aspects there are many exciting developments ahead,” Ted says.

A good example is the structure of the bacterial proteins known as pilins. “The unique protein structures our fundamental work has discovered turn out to be very useful in the design of new vaccines. It’s a great pleasure to see this science now being picked up and developed by the next generation of our scientists.”

Ted saw MWC through its first eight years as Director, before handing the reins to current Director Rod Dunbar in 2009. He has remained deeply involved in the management of the MWC as one of eight Principal Investigators, but from 2015 moves to a mentoring role as an Emeritus Principal Investigator. He continues to lead projects in his laboratory while easing into a retirement that includes frequent international travel at the invitation of colleagues overseas.

Ted is internationally renowned as the first person outside Europe and the US to complete a protein structure, and has received many scientific honours including New Zealand’s highest scientific award, the Rutherford Medal.

During Ted’s post-doctoral studies in Oxford in the 1960s, he worked with Nobel Prize winner Dorothy Hodgkin on the structure of insulin.

“She asked me what I was going to do when I came back to New Zealand. I told her, and that I expected to have little equipment or resources. She said, ‘you shouldn’t worry about that, the important thing is to just get started and it will all fall into place in the end’.”

Despite those who thought New Zealand was too small for structural biology, Ted’s area of interest, he was successful, first establishing his lab at Massey University then moving to the University of Auckland and founding the MWC.

He has established an outstanding legacy for his country. “Our area of research is still growing in its importance. We have a very healthy New Zealand community today with a new generation of impressive young leaders to build on what I began.”

His advice to the next generation: just get started.