In November 2014, the Maurice Wilkins Centre came together with the MacDiarmid Institute to organise a combined Centres of Research Excellence symposium at the University of Auckland. 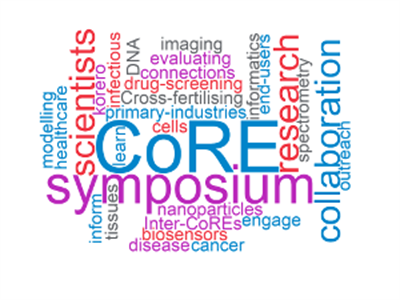 The MacDiarmid Institute for Advanced Materials and Nanotechnology and the MWC had recognised there were a number of synergies across their research programmes that should be explored and, in 2014, the stars aligned. The two centres successfully gained renewed CoRE funding in the latest round, so it made sense to get together in 2014.

“And we were also delighted to welcome the new CoREs, all of which have substantial intersections with our interests,” says MWC Director Rod Dunbar.

In addition to MWC and MacDiarmid, four new CoREs were announced in May 2014: The Medical Technologies CoRE, The Dodd-Walls Centre for Photonic and Quantum Technologies, Te Pūnaha Matatini - The Centre for Complex Systems and Networks, and Brain Research New Zealand - Rangahau Roro Aotearoa.

The full-day symposium, held at the University of Auckland, was attended by delegates from all six CoREs, with a focus on technology with potential to advance human health.

Professor David Williams, MacDiarmid Institute Deputy Director, says such meetings are a great place to make new connections. “There was just so much energy and so much interesting stuff going on.”

He emphasises that developing connections across quite disparate disciplines is essential to the international competitiveness of New Zealand research. “We are geographically isolated, and we have to work like we’re a city of four million people,” David says. “My personal attitude is you do the best science when you are having fun connecting with other people,” he adds. “This kind of collaboration is where you ferment ideas. You never know where the next cool idea is going to come from.”

At the conclusion of the symposium, the CoRES had identified a number of areas with exciting potential for collaboration. Two major new opportunities for the MWC are accessing new nanotechnology approaches to develop highly specific diagnostics for infectious disease; and using new imaging, measurement and delivery systems in skin to improve vaccine delivery and track the effects of new treatments.

The CoREs also agreed to co-ordinate their efforts in other areas, especially in outreach to schools, building on the success of programmes run by the MacDiarmid Institute and the MWC at both primary and secondary school levels.

But as Rod notes, this is only the beginning. “Whether we think of new molecules and materials from the MacDiarmid, studying complex signalling pathways with Te Pūnaha Matatini, new photonic measurement systems from the Dodd-Walls Centre, or more disease-focused projects with the MedTech CoRE and Brain Research New Zealand, it’s clear we have a very powerful cluster of expertise within these CoREs that we can all draw on to tackle major problems in medicine.”