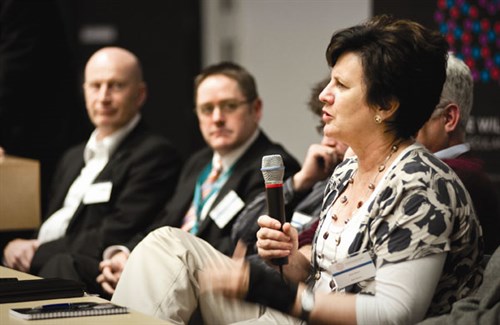 The symposium showcased local drug discovery research and infrastructure, and how the next generation of New Zealand-designed medicines could benefit the economy and our health. Local investors and drug development companies provided their perspectives on key factors for success in the industry.

“Drug discovery, development and manufacturing in New Zealand is already an industry worth hundreds of millions of dollars per year,” says Maurice Wilkins Centre Director Associate Professor Rod Dunbar. “And it has strong potential for growth. The goals of the symposium were to plan how to capitalise on the country’s remarkable record in drug discovery, and to build the relationships that will accelerate growth of the sector.”

Associate Professor Dunbar says that a highlight was a panel discussion on how to enhance connections between drug discovery research and the substantial local infrastructure that already exists in clinical trials, drug manufacture and distribution.

Nine New Zealand-designed drugs with potentially big futures were showcased at the symposium. “Several of these drugs are already earning tens of millions of dollars for New Zealand, either through payments from overseas companies developing the drugs, or from direct overseas investment in New Zealand drug development companies,” says Associate Professor Dunbar.

Three drug development companies that have spun-out from The University of Auckland, including the newly-formed Saratan Therpeutics, were presented to delegates by Will Charles from the university’s research and development commercialisation company Auckland UniServices Limited.

Jenny Morel (pictured), whose company No 8 Ventures, helps young technology companies realise their potential, spoke about how to attract investment in new medicines, saying that the reputation of researchers like Professors Bill Denny and Bill Wilson had proven crucial in mobilising local and international investment.