The first of an exciting new class of anticancer drugs will proceed to clinical development under an international deal announced in early 2011. 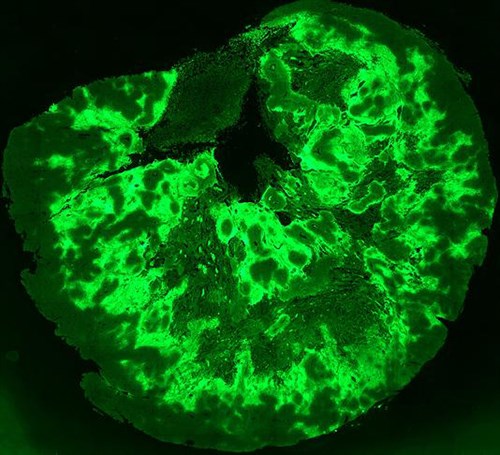 Eliminating cancer cells without harming healthy tissue is one of the greatest challenges facing cancer scientists. “Standard cancer therapies are indiscriminate in their attack against cancer cells and normal cells, and their toxicity in healthy tissues limits the dose that can safely be given to patients,” says cancer biologist Dr Adam Patterson.

To overcome this, Adam and medicinal chemist Dr Jeff Smaill have designed an exciting new class of anticancer “stealth” drugs that only become active once they reach a tumour. The compounds use the low oxygen levels (hypoxia) found in many tumours to convert from inactive “prodrugs” into highly active anticancer agents.

“About two thirds of tumours contain zones that cannot be reached by oxygen,” says Jeff.

“Cancer cells in these zones are more resistant to treatment, making them an important cause of treatment failure and cancer relapse, and scientists have been searching for a way to eliminate these cells for many years. There is also growing evidence that other parts of a tumour cycle through periods of hypoxia lasting from minutes to days.”

“Our prodrugs not only selectively target tumours but reside there for an unusually long time, releasing their active form slowly. So we can effectively deliver much more of our drug into a tumour than is possible with standard chemotherapy. Our research to date suggests that this is associated with far greater efficacy against tumours.”

The prodrugs target Human Epidermal Growth Factor Receptors (HERs) that are important for normal cell growth but become overactive or mutated in many cancers.

Since the prodrugs cannot convert into toxic form in the presence of oxygen, normal HER activity in healthy tissue is protected. Unlike drugs approved to date, the prodrugs inhibit all members of the HER family and may therefore be effective against a wider range of tumours, and provide permanent rather than temporary inhibition of HER activity.

PR509 is part of a pipeline of hypoxia-activated prodrugs from The University of Auckland licensed to pharmaceutical company Proacta Incorporated, a spin-out from the university founded by Professors Bill Wilson and Bill Denny.

A deal between Proacta and Yakult Honsha Co Ltd (Tokyo) will see PR509 developed for non-small cell lung cancer and likely evaluated in other cancers such as gastric, breast, and pancreatic cancer.

For an update on this story in 2012 see also: New Zealand patients trial local cancer drug