Inside all the cells of your body, tiny biological factories work tirelessly to produce the molecules your body needs. Proteins – and their smaller cousins called peptides – are made in your cells by joining together amino acids, like a string of beads. There are 20 different amino acids, and the final shape and function of each protein or peptide is determined by the order in which those 20 different amino acids appear.  It’s as if you have 20 different types of bead, each a different colour and shape, and you’re stringing them onto a thread of stretched elastic.  Let the elastic go and the beads collapse into a blob – with the order of the coloured beads determining the final shape of the blob.

Peptide chemistry allows peptides and proteins to be built in the same way – by joining amino acids together – but this time in a machine supplied with amino acids as chemical building blocks.  For some years, the MWC has invested in developing its peptide chemistry capability, centred around the laboratory of Professor Dame Margaret Brimble.

Dame Margaret has taken peptide chemistry to new levels, and her team is now supplying novel molecules to team’s right across the MWC, from new vaccines to treat cancer, to new antibiotics, to new hormones for treating obesity and diabetes. Some of this work has involved making new building blocks – adding new molecular tags such as sugars and fats to the amino acids, and in many cases making building blocks that don’t occur in the human body at all, such as those that appear in bacterial proteins.  These novel building blocks are opening up opportunities for all kinds of new molecules with potential as therapies and several have featured in high profile international chemistry journals.

By way of example Dame Margaret says her team originally developed and patented new methods to add fat molecules (“lipids”) to peptides in order to make cancer vaccines. “These molecules resemble cell wall components from bacteria so they are really powerful stimulants of the human immune system,” she says. At the same time she was working with MWC investigators Professor Debbie Hay and Associate Professor Kerry Loomes to synthesise metabolic hormones for the treatment of diabetes and obesity.  “Debbie and Kerry wanted to make new versions of these hormones that would persist in the body for much longer than their natural versions so they wouldn’t need to be injected as often. We quickly realised our cancer vaccine “lipidation” technology could help,” says Dame Margaret.

“We soon found that the lipidated versions of these hormones – called amylin and CGRP – worked very well in animal models,” says Kerry. “These new molecules have now been licensed to a New Zealand pharmaceutical company and are being developed towards clinical trials,” says Debbie.

“This shows the power of the leading edge technology within the Maurice Wilkins Centre to impact many different fields,” said the centre’s director Professor Rod Dunbar. “Chemistry developed for cancer therapy has spawned unexpected progeny across our whole research programme.” 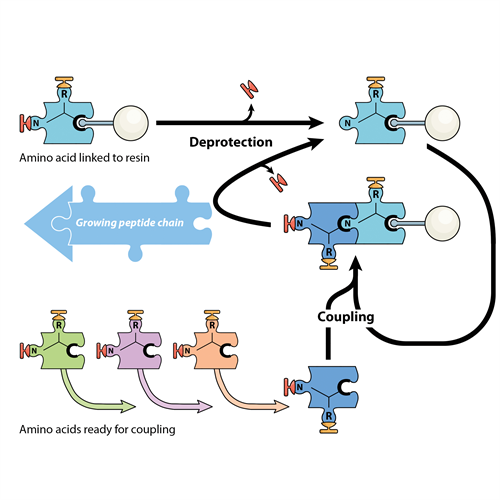 Peptide chemistry allows scientists to build peptides by joining together amino acids in a specific, pre-determined. This technique is being used to design peptides to be used as drugs or vaccines for different diseases.