Maurice Wilkins Centre Principal Investigator, Distinguished Professor Margaret Brimble, is the lead author of scientific papers that have featured on the cover of two prestigious Royal Society of Chemistry journals.

H. pylori is responsible for gastric and duodenal ulcers and has been linked with gastric cancer and type of lymphoma. Eliminating the bacterium can cure these diseases but current treatments are far from ideal. The scientists have synthesised variants of a compound that shows promise against H. pylori, and confirmed their biological activity.

In the second paper, published in Organic & Biomolecular Chemistry, Margaret and her PhD student Isabell Haym describe the Kulinkovich hydroxycyclopropanation reaction and its successful use in their laboratory to synthesise compounds found in nature.

The reaction is a flexible and convenient method of synthesising cyclopropanols, a group of compounds that are extremely useful to chemists. The cyclopropanols themselves have interesting biological properties and can also be used by chemists to create a wide range of other products. 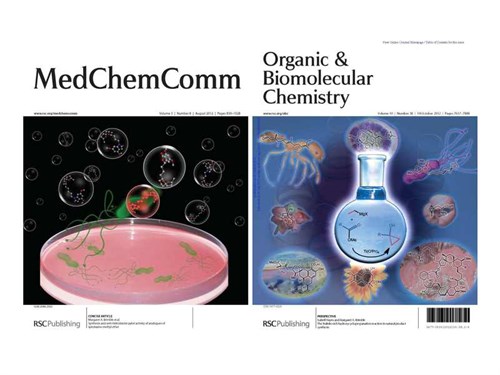