Distinguished Professor Ted Baker, an emeritus principal investigator of the Maurice Wilkins Centre, has been awarded the Lawrence Bragg Medal from the Society of Crystallographers in Australia and New Zealand (SCANZ).

The Bragg medal is the premier award of the SCANZ and honours the awardee’s “distinguished contributions to science involving X-ray, neutron or electron diffractions and/or imaging” for work done primarily in Australia and/or New Zealand.

As part of the acceptance of the award, Professor Baker gave a lecture entitled “Discovering the natural world through crystallography” at the 30th Conference of the Society of Crystallographers in Australia and New Zealand held at Hobart in late March. 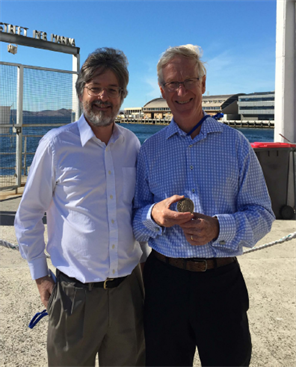 Above: Professor Ted Baker (R) with Professor Michael Parker (L) in Hobart, Tasmania at the 30th Conference for SCANZ.